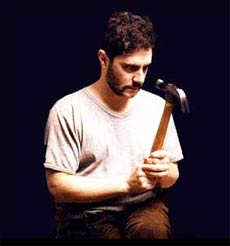 If you’re in the music business for very long, there’s one thing that you’re sure to need – a lawyer.

At least that’s the premise that Bob Wiseman brings to his unique and sure-to-be-pretty funny performance of “Actionable” at Caffe Lena in Saratoga Springs at 8pm on Saturday.

And, yes, Wiseman knows all too well what he’s talking about in the multi-media performance piece. “Actionable” is a slice of litigious life culled from his own real-life experiences.

Wiseman was a founding member of Canada’s premiere roots-rock band, Blue Rodeo. Since leaving the band following their ’92 album, “Lost Together,” Wiseman has enjoyed a successful solo career. He has also produced records for the likes of Ron Sexsmith, Lowest of the Low, and Bruce McCullough (of Kids in the Hall). Wiseman, who lives in Toronto, has won several Juno Awards and received a Lifetime Achievement Award from CBC Radio 3 in 2008.

He’s also tangled with a number of lawsuits over the years – some of rather amusing. For example, in ’93 when Prince changed his name to the infamous unpronounceable symbol, Wiseman issued a press release announcing that he was changing his name to Prince. As you might guess, the joke escalated into various legal issues. Hilarity ensued…

Bob Wiseman performs “Actionable” at Caffe Lena in Saratoga Springs at 8pm on Saturday. Tix are $14 in advance; $16 at the door.