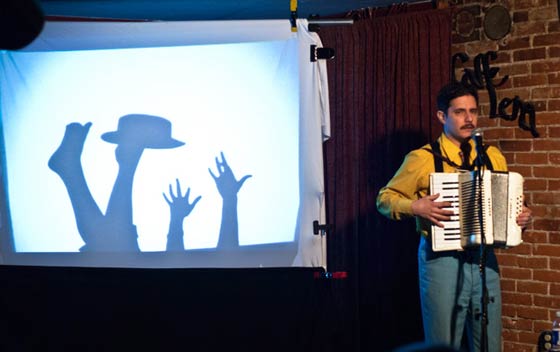 The last time I saw Bob Wiseman, it was more than two decades ago when he played keyboards for Canadian roots-rock band Blue Rodeo during their “Casino” tour-stop at Pauly’s Hotel. It was a cold December night (to quote a later Blue Rodeo lyric), but he heated up the joint with his free-wheeling, improvisational playing.

Fast forward to last Saturday night at Caffe Lena in Saratoga Springs. There was Wiseman – now standing alone on a stage with only a computer, a projector, an acoustic guitar, an accordion and his stories of what happened during and after his years in Blue Rodeo. It was his one-man show, “Actionable.”

Most of Wiseman’s humorous stories were about all the things that led various lawyers to send him letters threatening legal action – and he wasn’t shy about showing the letters on the projection screen behind him. The most famous story was his attempt to rename himself “Prince” in the wake of the real Prince’s decision to change his name to an unpronounceable symbol. The resulting letter from Prince’s lawyer became the basis for the name of Wiseman’s one-man show.

Wiseman played several of his original compositions throughout the show, accompanied by Super-8 films and other videos that he shot. During one song, he was joined on screen by multiple images of the same woman doing various things including tapping the rhythm out on a pair of wooden spoons, playing the accordion and singing harmony vocals. On another, there was a black-and-white Super-8 film of a sock puppet show illustrating his lyrics. On a third song, Wiseman played the accordion live and backed himself up on video by playing piano and his paint-splattered Casio keyboard from his Blue Rodeo days.

When he played, you could tell Wiseman was more than just a great keyboard player. His original compositions had interesting narratives on a variety of topics including the story of a woman who fell in love with a musician, only to die at the age of 33 from cancer. At the end of the song, it was revealed that she grew up in a small town that was the site of a uranium mine. And yet, it was one of his most touching and beautiful songs.

The real revelation was Wiseman’s singing voice. It was clear, strong and confident, and he wasn’t afraid to move into a falsetto from time to time. More importantly, it matched the tone of his quirky songs perfectly. On his song about being related by marriage to record label mogul David Geffen, the short staccato notes he hit as he rambled through what he would have written to Geffen seeking a recording deal made the story all the more humorous. That same humorous tone appeared in a song he wrote about Canadian lawyer Doug Christie, known in the “Great White North” for defending people accused of hate speech. But Wiseman could also be gentle, as in the song about the unfortunate woman from the town where uranium was mined.

The capper on this hour-long show was a set piece where Wiseman contacted a female lawyer via Skype about a song called “Rock and Tree.” When the lawyer claimed that she had heard the song so many times that she could harmonize to it, Wiseman challenged her to do so. Picking up his acoustic guitar, Wiseman began playing the song while a metronome in the lawyer’s office ticked off the beat. Sure enough, about midway through the song the lawyer started singing along with Wiseman – in perfect harmony.

It was a creative and a pitch-perfect way to end an enjoyable hour of life lessons from a very talented musician.

CD: Tom McWatters’ “A Beast Among the Civilized”