All in a Day’s Work: The 24-Hour Theater Project 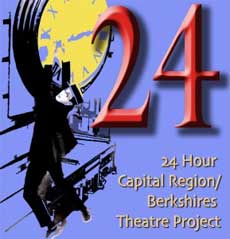 Three Nippertown arts organizations – WAM Theatre, MOPCO and the Arts Center of the Capital Region – are joining forces to present the inaugural 24 Hour Capital Region/Berkshire County Theatre Project. The project will team up a wide variety of Capital Region and Berkshire County theater artists all with the common task of creating five new, original works of theater in just 24 hours.

Here’s how it’s going to work: On Friday evening, March 25, five area playwrights will each be given a theme to write about, as well as the number of actors that they’ll have to work with. They will then have 12 hours to write a short script. The following morning, Saturday, March 26, directors, actors, stage managers, designers and technical staff will gather to rehearse those new scripts. And at 8pm that same Saturday, those five new scripts will be performed for the public.

If you’re interested in participating in the 24 Hour Theatre Project as a member of the cast or crew, just send an email to [email protected] with “24hr Theatre Project” in the subject line. They are seeking actors, stage managers, sound and light board operators and technical theater interns.

The five new theater works of the 24 Hour Theatre Project will be performed at the Arts Center of the Capital Region in Troy at 8pm on Saturday, March 26. Tix are $15.