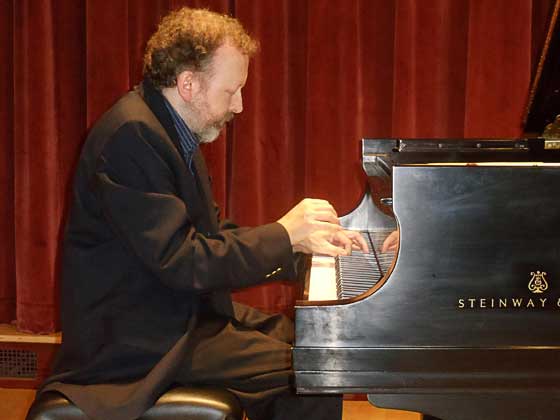 1. THE FIRST ALBUM I EVER BOUGHT WAS … “Duke Ellington: Love You Madly.” A classic compilation of the Duke’s best numbers, performed by a host of jazz greats.

2. THE FIRST CONCERT THAT I EVER SAW WAS … Maynard Ferguson at the Prom Ballroom in St. Paul, MN in the mid-’70s. “Chameleon”-era MF, and was it loud! Saw him at Greenville HS a few years ago, right before he died, and was amazed at the chops still on display.

3. THE FIRST MUSICAL INSTRUMENT I EVER OWNED OR PLAYED WAS … cornet, sixth grade; also used to go to neighbor’s house to plunk out music on piano until my folks bought a piano when I was 13. Imagine my three sisters and I used to fight over who got to play the piano, and so my Mom refereed, giving us 30-minute “turns”.

4. THE FIRST SONG THAT I EVER PERFORMED IN PUBLIC WAS … as a bandleader: “Misty” at a cocktail party.

5. THE FIRST BAND I WAS EVER IN WAS … Tim Olsen Trio in high school, playing school functions.

Composer, musician and educator Tim Olsen teams up with saxophonist Eric Walentowicz for an hour-long jazz concert at the Troy Savings Bank Music Hall in Troy at 12noon on Tuesday. As with all of the performances in the Music at Noon concert series, admission is free.

Get Yer Ha-Ha’s Out!