Author Karen Russell Ventures Into the Swamps of Her Imagination

Since the publication of her 2006 short-story collection “St. Lucy’s Home for Girls Raised By Wolves” (Knopf), 29-year-old Miami native Karen Russell has enjoyed the sort of critical acclaim usually only reserved for veteran literary heavyweights.

Russell’s tall tales, usually set in the swamps of a mythic and mystical Deep South, have drawn comparisons to revered fabulists like Italo Calvino and Gabriel Garcia Marquez. And no less a light than Stephen King has declared that her recently published debut novel, “Swamplandia!” (Knopf), is “brilliant, funny (and) original . . . this book will not leave my mind.”

In anticipation of her visit to the NYS Writers Institute on Thursday, Nippertown sent the author some questions so as to gain some insight into how this conjurer works her magic – the usual questions for a most extraordinary writer:

Can you talk about the challenges of writing a novel as opposed to short stories? How difficult or easy was the transition?

Stories I find equally difficult to write in their own ways, but they feel less risky to me – you have a lot less time invested in them, and you’re not trying to sustain a world for hundreds of pages. Part of the challenge for me was the “forest for the trees” issue. I like to fiddle around with sentences a lot and work on a sort of micro-scale, and this turned out not to be so super-compatible with novel-writing, where the scale is so much vaster, and you can easily wind up cutting ten pages of your favorite sentences in the service of the larger story.

It was an endurance feat for me to draft and to revise on that scale. But all that working and re-working also made me really proud that the book now exists in its current form. 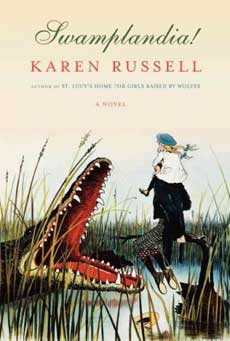 Your stories seem steeped in the natural mystery of the South. How much has local folklore and history influenced your work?

The world of “Swamplandia!” specifically probably owes a great debt to my school’s field trips to the Miccosukee Indian Village in the Everglades. I think these are still happening – a bunch of ten-year olds from “the mainland” of Miami stuff their ears with cotton balls and board an airboat; then you eat pinkish hamburgers with mayonnaise and watch a sweaty man in jeans perform a gator-wrestling demonstration. I remember feeling incredibly thirsty, and pretty bored.

For reasons I can’t perfectly explain, this day has become one of my favorite memories. It didn’t start out that way, but it has stealthily crept up in the rankings. Now I think that gator-wrestling demonstration, which I sort of snoozed through at the time, must have made a more lasting impression than I realized. And the extreme, alien beauty of the Everglades – and its extreme devastation, how we’ve nearly destroyed it – filtered through my imagination from a young age. If you head out there, it can feel like you’re standing in a mythic and a real space at once.

And to end with the obvious – what books inspired you to become a writer yourself?

Well, I think I owe a big debt to Lewis Carroll himself, probably, and other folks who I read as a kid like Ray Bradbury and Peter S. Beagle and Stephen King and Madeleine L’Engle. My favorite books were always the ones where I felt like an alternate world had been glass-blown by the author and, in an amazing feat of compression, shrunken down into a 200-page book.

I also loved from a very early age the experience of talking to other kids who had been to these same imaginary places as me—you know, Oz, Watership Down, Derry, Macondo, wherever. At a time when nobody could drive and we all lived within five-block radiuses of our houses, it seemed astonishing to have these literary travel experiences in common with someone; to discover that you’d both gone to a wonderland or a nightmare zone, and done this inside of the same skin, merged with the same character.

This was much better, I thought, than discovering that you and a friend had both bought the same jeans at the GAP or eaten dinner at the Chili’s near the airport.

Presented by the New York State Writers Institute, authors Karen Russell and Julie Orringer will offer a writing seminar at 4:15pm on Thursday at the Standish Room of UAlbany’s Science Library. The two authors will also read from their works at 8pm at the Standish Room. Admission to both events is free and open to the public.