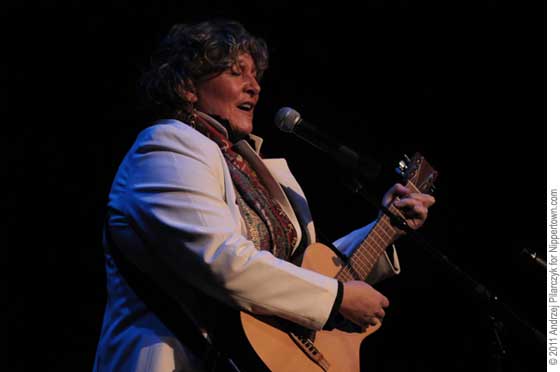 It’s been a while since Suede played the Eighth Step. Her most recent performance was back in the early 2000s, when the Eighth Step was briefly based at the Cohoes Music Hall. And back in the ’90s, she also performed as a solo as well as a member of the Flirtations at the Step’s original and long-time home – the church on the corner of State and Willett streets in Albany.

This time around, Suede was making her debut performance at the Step’s current home, the GE Theater at Proctors in Schenectady. And she was there last Saturday all by here lonesome – unless you count a grand piano, acoustic mini-Martin guitar and a silver trumpet.

The triple-threat diva offered two lively and generous sets, and while it was thoroughly fun, the canned big-band music coming out of the speakers made some feel more like they were at a karaoke bar, rather than a real concert. Suede assured the audience several times that this was not karaoke, and that the music was recorded for her by a real jazz band. She also mentioned that maybe the next time through, she would bring her working band with her – financial considerations allowing.

No harm, no foul. Suede was plugged in and turned on. Her voice was dynamic and passionate as she sang an array of pop and jazz tunes, while mixing in a healthy dose of engaging banter and humor between tunes. She roamed through a wide-ranging repertoire that included standards (including “Teach Me Tonight”), Tom Waits’ “Little Trip to Heaven,” Leonard Cohen’s ubiquitous “Hallelujah” and plenty of her fine original songs.

The lady can sing. And she also plays a mean, solid-toned trumpet. Suede really was a marvel, and somehow it all came together. The comparisons to Bette Midler-meets-Diana Krall were right on the money.

With Suede singing the songs, soundman extraordinaire Ed Brown was right on the money, too, pressing the right buttons to launch her pre-recorded accompaniment at just the right time. The audience was more than satisfied, humming a tune or two as they left the theater at the end of a satisfying concert.

SECOND OPINIONS:
Excerpt from Brian McElhiney’s review at The Daily Gazette: “From the first song, the hard-hitting ‘Let Me Love You,’ Suede was a cannonball of energy and gutsy humor, bubbling over with enthusiasm. It took the smallish crowd (diminished due to the poor weather) a while to reach her energy level – at one point, Suede quipped about the audience ‘going all Canadian’ on her, and the audience slowly began to loosen up. The songs stayed high energy through ‘Dangerous Mood,’ ‘New Coat of Paint’ – the first to feature Suede’s guitar and trumpet playing – and the deceptive ‘I Like to Lead,’ which began softly but built into another rager.” 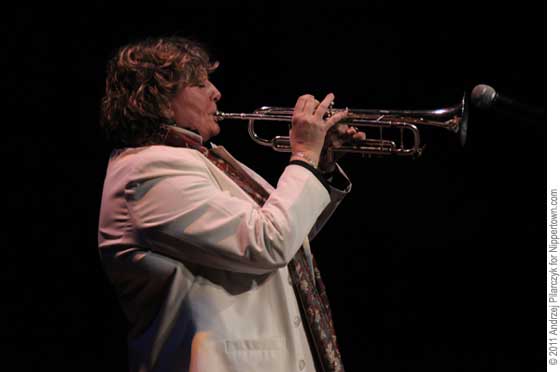