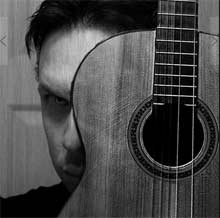 THE FIRST ALBUM I EVER BOUGHT WAS … Journey’s “Escape.” I got it on cassette at Tape
World and only bought it because I liked the artwork. I had no idea who Journey was at the time. I think I was eight or so. Over the years, I introduced myself to many new bands buying tapes and CDs just for the jacket art. I’ve rarely been disappointed. Must be lucky.

THE FIRST CONCERT I EVER SAW WAS … Screaming Trees, Poster Children and Pond… I don’t even remember where it was, but I got to meet the Poster Children (one of my favorite bands to this day), and they invited me backstage to meet the other bands and hang out. It was an awesome night. I remember I got myself a Poster Children t-shirt and one of guys in Pond told me I was wearing the wrong shirt… I guess it’s all a matter of opinion. Pond was really good though.

THE FIRST MUSICAL INSTRUMENT I EVER OWNED OR PLAYED WAS … Cello, sixth-ninth grade school orchestra. I tried picking it up again a few years after I set it down, only to find out I’d forgotten everything about playing it completely. Guitar was too ingrained in my fingers by then, I suppose. I had taken piano lessons before all that, but it never caught on… and I was terrible at it. They say it’s one of the easiest instruments to play. I must be terribly uncoordinated.

THE FIRST SONG I EVER PERFORMED IN PUBLIC WAS … “With or Without You” by U2. I was at a karaoke bar in Minnesota for my cousin’s wedding. I remember that I didn’t remember how the bridge went and screwed the song up royally. Sorry, Bono. I still play the song in my set… and I replace the bridge with the chorus from Journey’s “Don’t Stop Believing.” They’re the same song anyway. Have you ever noticed that?

THE FIRST BAND I WAS EVER IN WAS … The 100 Flowers Campaign, 1994. We only played one show together – a school dance. We were a three-guitar outfit and with a cute girl on bass (come to think of it, every band I’ve played in had a cute girl on bass). Even though the band didn’t last very long, the bass player and one of the guitarists got married… and that’s pretty adorable. I’ve lost touch with them over the years, but I like to think they still make music together.

Singer-songwriter David Fey steps into the spotlight at 8pm on Thursday at Dublin’s in Troy. Sharing the bill with him will be Garden Road and the Lost Sons. Admission is $5.

Song of the Week: “This World of Mine” by the Blackwell Sinners