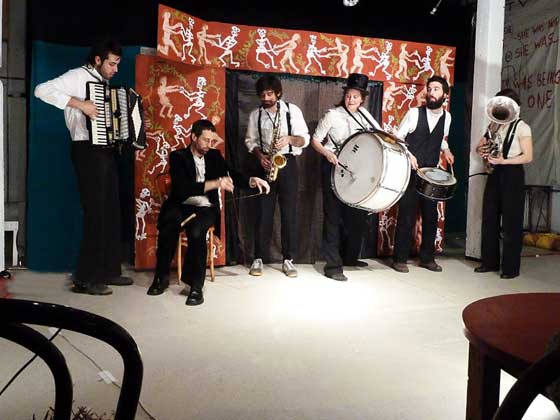 The arrival of Bread & Puppet Theater’s hand-painted old school bus in Hudson is one of the true harbingers of spring – like robins on your front yard, crocuses poking their heads up through the snow and the opening of The Snowman in Troy.

The seven-member troupe pulled into Time + Space Limited in Hudson on Thursday for their 13th annual spring appearance there. Wrapping up a southern tour, T+SL is the final stop before they head home to Glover, Vermont.

This time around, they’re presenting “The Decapitalization Cabaret,” an hour-long romp of funky political vaudeville featuring a variety of skits, songs, dances and a bit of audience interaction. And on Thursday’s opening night performance, they kicked it off with decapitation as well as decapitalization, as a trio of headless capitalists in business suits and briefcases kicked up their heels in a dance mourning their loss of profits, as well as their heads.

They prodded Wisconsin Governor Scott Walker with a funeral for American unions and workers’ rights, but fought back with the resurrection of labor movement as a puppet of Mother Jones – “labor organizer, union activist and grandmother of all agitators – rose from the grave to lead the charge.

Arizona came under fire, too, with “Nab That Alien,” a combination game show parody and knife-throwing circus sideshow act that resulted in the death of the Statue of Liberty.

There was the Broom Dance, in honor of Egypt and Libya and “of all people sweeping away their miserable governments.” There was a potent skit about universal health care. The Rotten Idea Theatre Co. presented “The Five Phases of Justice,” and “The Tale of Otto Titzling” was an accordion-fueled song-and-dance about the untold history of the brasiere.

The seven members are not only actors, but also puppeteers, backstage technicians, musicians, singers, dancers and more. They performed “The History of Humanity” and “The President and the Great Chair,” as well as “The Light of Man,” featuring beautifully painted bedsheets. And they wrapped up the evening with “Farms, Not Jails: A Rock Opera,” featuring the Unemployed Farm Animal Band pumping out parodies of songs by Journey and Black Sabbath.

Bread & Puppet isn’t really a puppet theater in the traditional sense, although a number of puppets – ranging in size from six inches to a dozen feet tall – are utilized during the performance. Rather, Bread & Puppet is part Commedia dell’arte. Part Bertolt Brecht. Part Jon Stewart. Part circus. Part Weimar cabaret. And absolutely wonderful.

And, yes, they do indeed serve bread after every performance. It’s theater of substance and sustenance.

The Bread & Puppet Theater’s production of “The Decapitalization Cabaret” continues at Time + Space Limited in Hudson at 8pm tonight (Friday) and Saturday, as well as at 2pm Saturday and Sunday. Tix are $10; children under 13 $5.

Won’t Forget, Can’t Regret What I Did for Love at Mac Haydn Theatre…

Won’t Forget, Can’t Regret What I Did for Love…