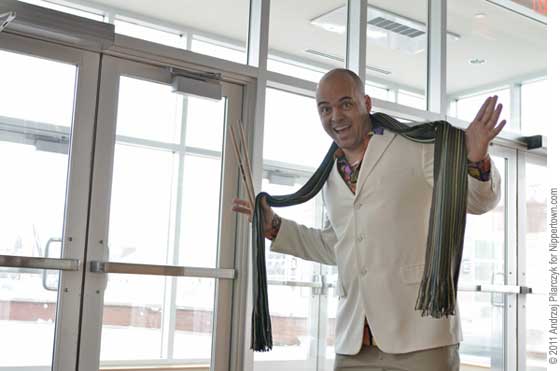 If there’s one thing everyone can agree on about Joe Barna, it’s that he’s driven. It’s all in the eyes, especially when he’s behind a drum kit backing up his band Sketches of Influence. I’ve described Barna as a combination of Tony Williams and Animal from “The Muppet Show,” mainly because when Barna’s eyes get Animal-big, you know something highly explosive is about to happen.

That said, how does a drummer whose unofficial motto used to be “This kit goes to 11” put together a disc like “Blowin’ it Out” – with no drum solos?

“Confidence and maturity,” he told me as we sat in the café at Borders in Clifton Park. “I don’t need people to stare at me any more. I don’t have to take my anger out on my musicians any more. The drums are there to create texture and feel. They’re not there to be heard unless someone’s playing something. I wrote it all, what more can I do? I’m a composer, not a drummer.”

It’s kind of a shocking statement coming from someone as closely-associated with a single instrument as Barna is. And the seriousness in his statements definitely belies his past image as someone who was as much about clowning on stage as he was about playing the gig.

“Jazz today is congested. A lot of people are intentionally trying to be groundbreaking. Nobody’s ever ‘done anything’ on purpose! When did it become uncool to play a pretty melody? Jazz swings. Jazz reaches the heart before it reaches the head. If you’re thinking before you’re feeling, it ain’t jazz.” And Barna believes his fellow drummers are part of the problem. “They play way too dense. There’s no air. There’s no space. There’s interacting, and then there’s interrupting. Eighty percent of the drummers today interrupt. We can see you! There’s no reason to keep playing! They don’t take into account that music vibrates, and a note lasts for more than a split second. They’re not enjoying the notes they just played.” He smiled, leaned forward, and talked ‘into’ my notepad. “Hey, drummers! It’s not uncool to play the high-hat on 2 and 4!”

Barna needed all of that confidence and maturity during the construction process of “Blowin’,” which started with last April’s three-night recording session at Sal Prizio’s late, lamented Bread & Jam Café in Cohoes. Recording the music was actually the easiest part; putting it together and getting it on disc took the better part of a year that featured multiple setbacks, both professional and personal, including a bout with colitis that put him in the hospital.

But after all that, he’s come to the point many players don’t reach – the official release of the work itself, to be celebrated on Thursday evening with a concert at College of St. Rose’s Massry Center for the Arts. It’s really a full-circle thing, since Sal Prizio is now Massry’s director of programming. Barna may have survived the process thanks to two aspects of his father’s personality – one Barna would like to emulate, and one he’d like to leave behind. Unsurprisingly, Barna admires his father’s inability to compromise. “He wants to do what he wants to do, and he won’t settle for anything less.” Even so, Barna works to lose “his resentment and contempt for the individuals he upset along the way from being (the way he was). You can’t have both. If you’re going full-steam ahead, you’re going to piss people some off. You have to accept that fact. You have to have a short memory. You have to have amnesia.”

And now that Barna has achieved his hard-won goal… he’s already making plans to move on. He gave a taste of that new direction recently during a private party at Professor Java’s Coffee Sanctuary in Colonie. Piano was replaced by guitar, giving the music more steel, and exploration was definitely the word of the evening. “I’m a devout follower of Miles Davis,” Barna asserted. “If I’ve already done it, why do it again? I modeled the tone of my band after Art Blakey and Elvin Jones. This is more like a ‘Love Supreme’ vibe. I’m only playing three songs from the CD, and then there’s two surprises where the horns and the rhythm section don’t have to think – they just have to react.”

And the changes don’t stop there. “Blowin’” featured local stalwarts Dave Solazzo on piano and Lou Smaldone on bass, as well as Vanguard Jazz Orchestra alums Joe Magnarelli and Jon Gordon; at Massry, the piano chair will be held down by Theo Hill, an old friend of Barna’s who’s currently touring with Frank Lacy. Barna firmly believes Hill is “one of the most dominant piano players in the country under the age of 30.” He says the final result will be “a lot more fun, a lot more spiritual. I have to open up the music so the guys I’m hiring have room to invent.”

Joe Barna & Sketches of Influence celebrate the release of “Blowin’ It Out” in concert at the College of Saint Rose’s Massry Center in Albany at 7:30pm on Thursday. The Brian Patneaude Quartet will open the show. Tix are $15.

Happy Birthday to A Place for Jazz