24-Hour Theater Project @ the Arts Center of the Capital Region 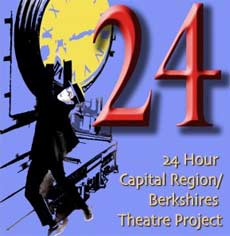 Three Nippertown arts organizations – WAM Theatre, MOPCO and the Arts Center of the Capital Region – are joining forces to present the inaugural 24 Hour Capital Region/Berkshire County Theatre Project. The project will team up a wide variety of Capital Region and Berkshire County theater artists all with the do-or-die task of creating five new, original works of theater in the span of just 24 hours.

Here’s how it’s going to work: On Friday evening, five area playwrights will each be given a theme to write about, as well as the number of actors that they’ll have to work with. They will then have 12 hours to write a short script. The next morning, directors, actors, stage managers, designers and technical staff will gather to rehearse those brand-spankin-new scripts. And then at 8pm that same Saturday, those five new scripts will be performed for the public at the Arts Center of the Capital Region in Troy.

Is it a risk? Yeah, quite definitely. Will it be fun? Oh, you bet your ass.

MOPCO’s Kat Koppett declares, “This project provides an incredible chance to consolidate all the bonding and brilliance of a traditional endeavor into a very brief span. And at MOPCO, all our work is improvised, so having 24 hours and a script, heck, that’s a life time.”

Noted Nippertown actor Yvonne Perry says, “I’m so impressed with the level of talent from both regions willing to collaborate with this event.”

And actor John Romeo of the late New York State Theater Institute proclaims, “There’s a rush of adrenalin that comes with making bold choices in a project like this. There’s no time to sit and ponder. It’s where one’s instincts get challenged.”

Yes, instincts will definitely be challenged as many of Nippertown’s finest theater folks – both in the spotlight and behind the scenes – join forces across the state line to unite the Capital Region and Berkshires talent. Here are some of the folks involved: