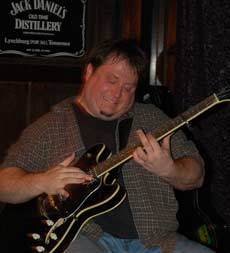 1. THE FIRST ALBUM I EVER BOUGHT WAS … “Are You Experienced” by Jimi Hendrix… not sure what year it was, sometime in the early ’80s.

2. THE FIRST CONCERT I EVER SAW WAS … Not including the various country shows my family took me to in early 1980s (before pop-country existed) at Indian Ranch in Webster, Mass., it was The Who in 1989 at Sullivan Stadium in Foxboro.

3. THE FIRST MUSICAL INSTRUMENT I EVER OWNED OR PLAYED WAS … Bass Guitar (Carvin Bass and Ampeg Combo Amp)

4. THE FIRST SONG I EVER PERFORMED IN PUBLIC WAS … Freddie King’s famous instrumental “Hideaway.” When you are the singer as well – and not a good one – you look to the instrumental as much as possible.

5. THE FIRST BAND I WAS EVER IN WAS … “Pequot Munroe” in Providence, RI. We never left the garage.

Guitarist Jim Chilson and the other members of the Boston-based roots-rock band Ten Foot Polecats make their Nippertown debut at Valentine’s Music Hall in Albany on Friday night in support of their latest CD, “I Get Blamed for Everything I Do.” They will share the stage with Al & the Black Cats, Tex Railer’s Doomtown, Black Tie Operation, the Killerados and Charmboy.

24-Hour Theater Project @ the Arts Center of the Capital Region