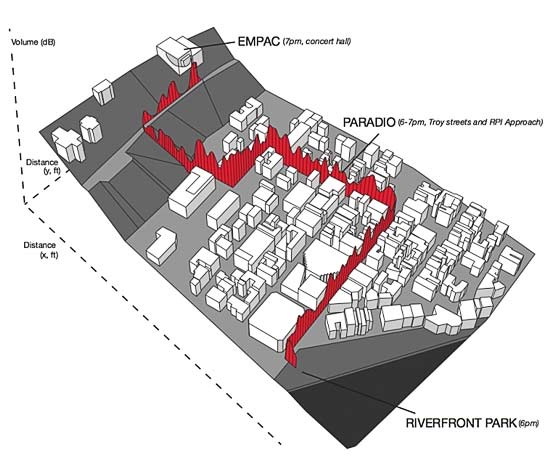 There’s a concert at EMPAC at RPI on Wednesday evening – but it begins in Troy’s Riverfront Park.

That’s right. At 6pm on Wednesday in Riverfront Park, choirs from four Nippertown colleges – RPI, UAlbany, College of Saint Rose and Russell Sage College – will gather together for a singular vocal extravaganza. 160 singers will raise their voices in “Troy Paradio,” an original work by Canadian sound artist Kathy Kennedy, and their singing will be accompanied by an electronic soundtrack broadcast on radio station WRPI (91.5FM).

The combined choirs (and the audience) will then continue singing as they parade through the streets of downtown Troy through the Approach (the staircase connecting the city and the campus) and ending up at the EMPAC Concert Hall, where the remainder of the concert program will be performed.

“There’s music everywhere in the world – and putting music into the public, into the environment, is fun and engaging and educational,” says Michael Century, a professor of arts at RPI. “I want to join the city of Troy, the experience of moving through the city of Troy and the more familiar experience of listening to a concert in the concert hall.”

Presented by iEAR at RPI, the PolyChoral Project promises to be a one-of-a-kind, surround-sound musical experience. And it’s free, too.

“This concert mixes the unconventionality of ‘Troy Paradio’ with the glorious sound and architecture of the EMPAC Concert Hall. There will be four choirs in four locations with pieces that go all the way back to the 17th century and all the way forward to 2011,” Century adds. “It’s an immersive experience – with choral music coming at you from all directions.”