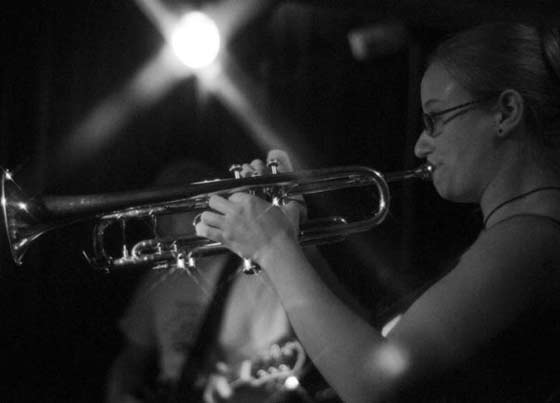 1. THE FIRST ALBUM I EVER BOUGHT WAS … The first album I bought that I really remember was “Kind of Blue” – Miles Davis. I even slept with that album playing in the background for years.

2. THE FIRST CONCERT THAT I EVER SAW WAS … Squirrel Nut Zippers at Memorial Auditorium in Burlington, VT. I was 13 and remember being in the front row and being blown away by their trumpet player and his bright red shoes.

3. THE FIRST MUSICAL INSTRUMENT I EVER OWNED OR PLAYED WAS … Trumpet. In third grade, our teachers brought us and our parents into a room and asked us to pick an instrument. I pointed to a clarinet, but my mom said it had too many buttons, so I picked the trumpet because it was shiny. Twenty years later, here I am!

4. THE FIRST SONG THAT I EVER PERFORMED IN PUBLIC WAS … I have absolutely no recollection – that’s going back quite some time. I’m sure it was probably something along the lines of “Twinkle Twinkle Little Star.” I remember my first solo I ever took where I really had to stand up and walk to the front of the stage much more vividly. It was in my junior year of college with the U of Vermont Jazz Ensemble, and I had the main solo in “Portrait of Ella Fitzgerald” by Duke Ellington. I was so nervous. I remember a fellow trumpet player looked over and told me “BREATHE” and pushed me towards the front.

5. THE FIRST BAND I WAS EVER IN WAS … The first band that I played in clubs with was Soulvation Army, a 15-piece old-school funk band that was pretty much the UVM jazz department outside of school. We had some fantastic times in Burlington. How can you go wrong with that many people on stage shouting Parliament and James Brown lyrics?

Trumpeter Audrey Leduc blows her horn with her bandmates in Oobleck (formerly known as Duchess & the Afro Dub Rebels) at 9pm on Friday at Savannah’s in Albany. Sharing the stage will be Chinatown Lights and Dance Cancer. Admission is $5.