CD: Steve Earle’s “I’ll Never Get Out of This World Alive” 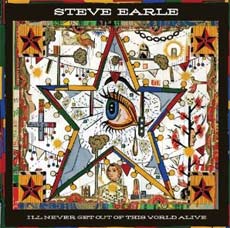 A great big deal was made about Steve Earle’s new New York sound when he moved to Manhattan a few years back. His 2007 album, “Washington Square Serenade,” in title and in content nodded to New York, with references to Pale Male, bad radio and the cacophony of voices echoing Ellis Island into the 21st century. Earle even recorded parts of the disc at home on Jones Street, pulling in loops, DJ beats and sounds of hip-hop and forro.

Today Earle releases his first album of original music since “Serenade,” and, if anything, “I’ll Never Get Out Of This World Alive,” is an even more New York record (despite being recorded in LA).

Earle has taken his famous Townes Van Zandt boots off of Dylan’s coffee table and placed them firmly at the corner of Bleecker and Macdougal, circa 1965.

If here and there he moves the intersection from the West Village to Schertz, Texas (“Waitin’ On The Sky”), New Orleans, Louisiana (“Meet Me In The Alleyway”) and the water east and south of each (“Gulf of Mexico”), so be it.

There’s no danger of Earle ever being as clean cut as the friendlier folk acts of the era, but he does veer into land chanteys (“Little Emperor”) and the Anthology of American Folk Music (“Molly-O”). When he channels more modern influences, he sounds eerily like Shane McGowan on the aforementioned “Gulf” and Tom Waits on
“Alleyway.” He covered the latter’s “Way Down In The Hole” on “Serenade,” but he apes him flat out – the New York “Rain Dogs” era, natch – on the creaky bullhorn blues of “Alley.”

Throughout, Earle – boots down – has composed his most Dylan-esque set of lyrics. None sound a wit like the Bard of Hibbing, but they share the fervent shower of words that marked Dylan’s early days, and the way they’re shoehorned into ancient folk forms newly fitted to the artist’s current vision.

T Bone Burnett produces the record. Youngsters under 45 may have forgotten – more likely never known – that Burnett first came to notice as the freakishly-tall, begoggled, Merlin-hatted guitar strangler on the Rolling Thunder Revue. He out-weirded Dylan, in full face paint, on that run – no easy task.

Burnett’s brought together a group of like-minded spirits to assist Earle, including fellow New Yorker Jackson Smith (Patti’s kid) on guitar, Nickel Creek alumnus Sara Watkins on fiddle and utility infielder Greg Leisz on pedal steel. And has there ever been a drummer more suited to Earle’s heavy-lidded hairy lope than Jay Bellerose? The men are joined at the hip on this album, and what took so long?

“I’ll Never Get Out Of This World” is both less political and less brimming with chick songs than past Earle efforts. It has both, including “God is God,” which Joan Baez offered on her 2008 Earle-produced effort, “The Day After Tomorrow,” and “Every Part of Me,” which manages to be elegiac and shimmering at the same time. Baez made “God” into an anthem, covering her doubt with nerve. Earle just states it as a matter of fact, and much more on target.

The record closes – as “Serenade” did – with a song for TV producer David Simon. Last time it was Waits’ number for “The Wire.” This time it’s “This City” for “Treme.”

Earle is nearly a Nippertown resident, with a second home in Woodstock. Makes one wonder if the follow-up to “World” (which will soon be followed by a novel of the same name) will be more Big Pink than Big Apple.