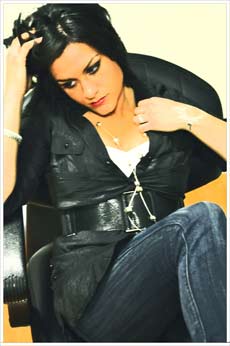 1. THE FIRST ALBUM I EVER BOUGHT WAS … I had to truly think this one through! Sadly, it was Paula Abdul’s, “Forever Your Girl.” I wanted to be a fly girl for “In Living Color,” so I bought that tape to practice my dance moves.

2. THE FIRST CONCERT THAT I EVER SAW WAS … B.B. King! My dad and I went together, and every year after, we made plans to see him and Lucille. He’s an incredible performer.

3. THE FIRST MUSICAL INSTRUMENT I EVER OWNED OR PLAYED WAS … Piano. I started lessons when I was five. I cried when my Mom made me practice, but eventually I grew out of that 😉

4. THE FIRST SONG THAT I EVER PERFORMED IN PUBLIC WAS … Some song I had written with my BFF at the time. We used to play guitar and sing at Cafe Dolce on Jay Street.

5. THE FIRST BAND I WAS EVER IN WAS … I’ve never really been in a band! I sort of just sing with everyone and anyone that will let me!

Danielle Gaudin – the grand prize winner of the Capital Region’s Got Talent competition held at the late, great Revolution Hall back in the fall of 2009 – is about to release her third CD, “Lucky Number Three.” The disc will be unveiled at her CD release party at 8pm on Saturday at the Bayou Cafe in Glenville. Sharing the stage will be blues band Chunks of Funk. Admission is $5.