Donald “The Junkman” Knaack, What Was the First Album You Ever Bought? 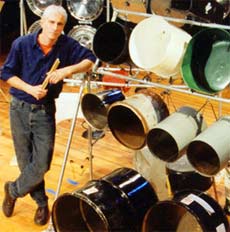 I was very young, and I remember that my mother found this album in the store. It was called ‘Provocative Percussion,’ which was actually a series of albums, I think. It had a silver cover with all this black lettering and circles and jagged lines. She bought it because she knew I loved the drums.

Of course, those albums were just basically pop orchestral charts with a lot of percussion spice in them, but I absolutely adored it because it opened me up to percussion. Up till then, I had just been paying the drum … the snare drum in the elementary school band. And then suddenly, I discovered the world of maracas and bongos and things like that. That was very impressive, and it definitely left its mark on me.”

Percussionist-composer Donald “The Junkman” Knaack – who plays music on instruments created from found objects and recycled materials – will perform at the fifth annual Lupine Festival at the Albany Pine Bush Discovery Center from 10am-4pm on Saturday. Admission is free.