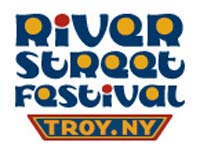 The annual River Street Festival takes over downtown Troy on Saturday, June 18 with a day-long outdoor bash that features lots of arts and crafts vendors, plenty of good food and beverages and the famous sidewalk chalk drawing competition.

Of course, there will also be lots of great music all throughout the day on two stages. Here’s the schedule of musical performance for the 2011 River Street Festival:

Nathan Williams, What Was the First Album You Ever Bought?

An Evening with Carsie Blanton at The Linda ON JUNE 3RD

Hanson Slated to Appear at Empire Live For Their Red Green…