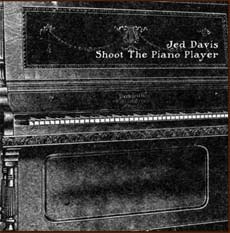 “I’ve been doing this ‘Single of the Month’ thing on my Bandcamp page, giving away a new free track on the 7th of every month,” Davis explains. “July 7 is my birthday, so I decided to make a whole album available this month, instead of just one song.”

Well, today is July 7, and in honor of Davis birthday, the album is available today and today only at a name-your-own price. After today, it will be $9.99.

Local music fans might know Davis from such bands as Hanslick Rebellion, Collider or his most recent band Sevendys, an all-star little combo featuring Avi Buffalo members Sheridan Riley (drums) and the ferocious guitarist Avi Zahner-Isenberg. They made their very impressive live Nippertown debut at The Linda last month, whipping up a batch of Davis’ delightfully idiocyncratic pop tunes, as well as covers from the Misfits (“Astro Zombies”) and George Harrison (“Wah-Wah”).

“Shoot The Piano Player” is a more stripped-down affair, a baker’s dozen tunes written over the course of a 15-year span and recorded a couple summers ago in Chicago with just Davis and drummer Joe Abbatantuono. “We recorded everything live to tape, including vocals, in two days,” Davis admits. “The only overdubs on the whole record are one organ part and a couple of backing vocals.”

Of special note, superstar producer Steve Albini was at the helm engineering the recording. “Getting to watch Albini in the studio was one of the coolest and most educational experiences I’ve had,” says Davis. “His work ethic is unparalleled. And as an after-hours bonus, the dude even taught me how to play Pinochle.”

Davis, of course, is no stranger to “dead media.” Last year, he released his single, “Yuppie Exodus from DUMBO,” on wax cylinder. No foolin’…

And, by the way, happy birthday, Mr. Davis.

Sonny Landreth, What Was the First Album You Ever Bought?