Radio, No Radio: WEXT-FM Is Knocked Off the Air 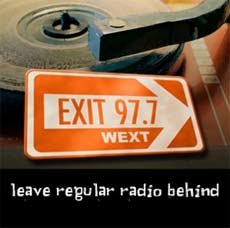 Apparently, the WEXT antennae experienced significant damage during tropical storm Irene. Technicians were able to climb the tower to inspect the damage last Friday afternoon and found the damage to be beyond repair, requiring a new antennae.

In addition, power to the WEXT transmitter has now been lost because of damage to a National Grid sub-station. It is not possible to determine if any damage to the transmitter has been experienced until electricity has been returned to the site. Information on when that will be is not yet available.

In the meantime, listeners can hear WEXT programming on the HD2 stream of WMHT-FM. WEXT is also streaming the service through its website and will continue to provide listening opportunities through its free iPhone app.

Of course, the damage couldn’t have come at a worse time, as WEXT is planning heavy promotion this week for its biggest event, LarkFest, which will take place on Lark Street in Albany beginning at 10am on Saturday (September 17).

UPDATE: At 3pm on Monday (September 12), we received this surprise report from WEXT’s Chris Wienk: “Thanks to National Grid for expediting the work on the electric power to the transmitter site, and thanks to Lloyd and Derk for making it happen! We are back to our post-Irene broadcast! WEXT is now on the air! Woo hoo! Thank you all for your thoughts and hopes for speedy recovery! They worked!”

Another New November Concert at the Palace Theatre