Those were the closing words of Shonen Knife, chanted by the trio as they wrapped up their euphoric, high-energy show at Valentine’s Music Hall with the Ramones’ punk-rock battle cry.

For their encore, Shonen Knife had emerged dressed as their Ramones-covering alter ego, the Osaka Ramones, wearing faded blue jeans and shiny black leather jackets. Starting with “Blitzkrieg Bop” and closing with “Pinhead,” they whipped through seven Ramones songs in short blasts, their fists raised in the air and long black hair thrashed in circles.

When they started in 1981, the all-female group from Osaka, Japan, endeared fans with catchy tunes, all-around cuteness and charming lyrics about animals, sweets and dancing Barbie – but could barely play their instruments.

That’s not the case today. On a 30th anniversary tour of North America that brought them to Valentine’s on their very last stop (for their first time in Albany), Shonen Knife had rock moves galore: hands raised in devil-horn salute, coordinated hair tosses, guitars dipped and arms wind-milled in unison.

But they also had the rock and roll chops to churn the Valentine’s crowd into frenzy. Of course their line-up is different today, with guitarist Naoko Yamano – who first formed the band with her sister Atsuko and friend Michie Nakatani – the only original member remaining.

But the newer members, bassist Ritsuko Taneda and drummer Emi Morimoto, added a real punk-rock power to the band. Wearing matching Mondrian-inspired color-block dresses for their main hour-long set, the trio blasted through a set of tunes spanning their 30-year history.

“Twist Barbie” – which channels the Ramones channeling the Beach Boys – sounded faster and more powerful than on record. “Sweet Christmas,” a new number about eating holiday treats, had all the sweet, sticky goodness of its subject, yet they played it with hair-flying, punk-pop abandon. And when drummer Morimoto sang the adorable “I Am a Cat,” the trio’s smiles were so wide they were infectious.

Before “Rock Society,” another Ramones-inspired three-chord bopper that appeared on Shonen Knife’s 2006 album “Genki Shock,” Yamano explained that “shock” is a Japanese term meaning cheerful, energetic. Quite fitting, of course, because Shonen Knife brought a supreme level of cheerfulness and energy to their rocking.

They make no secret of their reverence for American rock and roll. The song “Red Kross” paid tribute to the L.A. cult band while reciting a Ramones “hey ho, let’s go” chorus. But Shonen Knife played their version of it in an inspired, un-ironic and utterly joyful way that few American rock bands come close to matching today.

Sign me up for the Tim Livingston punk-rock workout video. The magnetic frontman of Albany’s Last Conspirators frog-hopped up and down during “Tribulation Blues,” sank down to his haunches to belt the semi-ironic “Long Live TV,” and stalked energetically about the stage while drummer Al Kash, guitarist Terry Plunkett and bassist Nick Bisanz bashed out a set of straight-up, old school rockers. 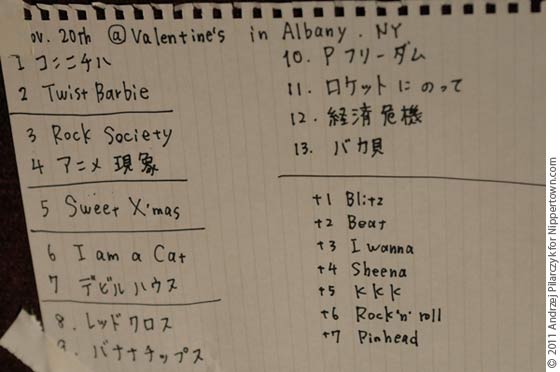