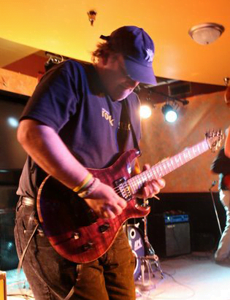 1. THE FIRST ALBUM I EVER BOUGHT WAS … The first albums I ever bought with my own money were Neil Young’s “Decade” and Lynyrd Skynyrd’s “One More from the Road,” BUT I had just been given Aerosmith’s “Toys in the Attic” and Elton John’s “Caribou” as a birthday present – so those four albums started my collection!

2. THE FIRST CONCERT THAT I EVER SAW WAS … My sister’s boyfriend Mark took me to see Yes at the Hartford Civic Center with the original lineup! I still remember Steve Howe playing “The Clap” and Rick Wakeman’s solo piece and the room spinning like his Leslie! I had never heard anything like that music before and was stunned!

3. THE FIRST MUSICAL INSTRUMENT I EVER OWNED OR PLAYED WAS … My Aunt Pat, a Beatles freak who even saw them at Shea Stadium, had an old Hohner electric guitar and cool tube amp with tremolo that she let me play when I was like 10 years old, and it’s because of her that I’m a musician (and Beatle lover!) today. Thanks, Aunt Pat!

4. THE FIRST SONG THAT I EVER PERFORMED IN PUBLIC WAS … Well, I played drums in elementary school in the dance band and the marching band, so maybe “Song Sung Blue” or “Sweet Caroline” was first public song, probably at some school concert. Mr. Billingham, the music teacher, was forever telling we drummers to “play softer, dammit!!!” Didn’t he know I was a rocker? But the first song in public on guitar was probably “Smoke on the Water” (a song I routinely tortured my family with from the beginning of my guitar career) at a house party near Siena where 10 girls lived off campus and my band SnowBlind played for the Women’s Rugby tournament – pure heaven, and I was hooked!!!!!

5. THE FIRST BAND I WAS EVER IN WAS … At Chester Elementary School in CT, I played a drum kit in Jason & the Wildcats. It was just me and a sax player, Jason. We’d play covers and a few originals at lunch time for whatever victims wandered by. But my first rock band was SnowBlind in my freshman year at Siena College. House parties were our specialty…

Blaze plugs in to play as a duo with Erin Harkes at 7:30pm tonight at McGeary’s Pub in Albany. He’ll also be joining the whole Erin Harkes Band for upcoming gigs at Graney’s Stout in Albany on Saturday night (December 17) and at Savannah’s/Dublin Underground in Albany on Thursday, December 22.