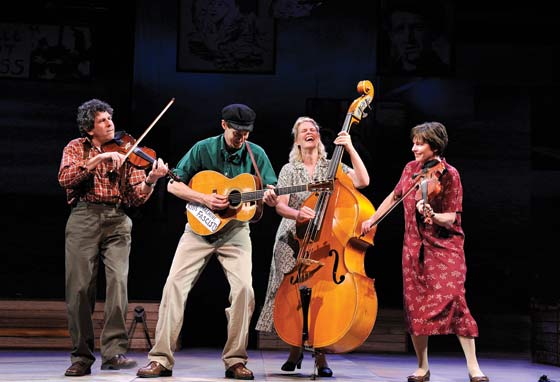 Earlier this month (July 14, to be exact), we celebrated the 100th anniversary of the birth of one of the Godfathers of American Folk Music, Woody Guthrie. So the timing of “Woody Sez” – presented at the Wood Theater in Glens Falls by the Adirondack Theatre Festival as the closing show of their 2012 season – couldn’t have been any better. But this is a show that reaches deep into the heart of America – yes, Guthrie did pen the American folksinger’s national anthem, “This Land Is Your Land” – in so many ways that are both historical and decidedly contemporary.

Whether it was talking blues, dust bowl ballads, union anthems or kids’ songs, Woody sang ’em all straight from his heart without pulling any punches, and “Woody Sez” does an excellent job of not only presenting the music and the life of Woody Guthrie, but also in capturing his indomitable spirit.

Woody’s songs gave voice to the common people – the factory workers, the dirt farmers, the migrant fruit pickers – and “Woody Sez” offers a mighty fine representation of Woody’s own voice, silenced since his death from Huntington’s disease in 1967.

Much of that credit goes to David M. Lutken, who not only portrays Woody’s with marvelously plain-spoken understatement, but who also co-created the show with director Nick Corley. And he gets plenty of able assistance from his three onstage cohorts – Darcie Deaville, David Finch and Helen Jean Russell, who are each enlisted to play a variety of assorted supporting roles. There isn’t a weak link in the chain.

Lutken also serves as the musical director, and quite rightly, music is at the very heart and soul of the show. Somehow they’ve managed to squeeze about 30 songs into a two-act show that runs about two hours (including intermission). And yet the pacing rarely seems rushed, and songs – even in their sometimes abridged versions – never seem to be given short shrift. Each of the four performers are quite capable musicians on a variety of instruments, and they’re each excellent singers, as well. And unlike so many musical theater productions, they each actually sound like genuine folksingers, without the usual dreaded artifice of being Broadway show singers playing the part of “folksingers.”

And to prove that point, after last Saturday’s performance, the four cast members packed up a few of their arsenal of instruments, wandered across the street to the patio of the Davidson Brothers Brewing Company and led a hootenanny for theater-goers and the unsuspecting brew pub patrons. Folks joined in on fiddle, guitar, washboard, washtub bass and assorted percussion instruments, while the repertoire ranged from Lead Belly to Hank Williams and even a rendition of “Besame Mucho.”

You get the feeling that Woody would have loved it…