What a weekend for art lovers! Tonight, DownStreet Art takes over North Adams. Tomorrow is Troy Night Out in downtown Troy and this weekend NADA Hudson and The Hudson Independent Artists Trail take over all of downtown Hudson.

Opening:
DownStreet Art @ Downtown North Adams. It’s the last Thursday of the month, which means it’s time for DownStreet Art, the North Adams arts walk featuring a host of exhibit openings, performances, happenings and businesses open late with DownStreet Art specials. Consult the map and start wandering, or grab seat on the Art Trolley. Here’s just some of the highlights:

MCLA Gallery 51 is presenting “Meet Me in the Middle of the Air,” a solo exhibition of new work by local artist Sean Riley that feature paintings, drawings, and works constructed from fabric. Riley’s recent work derives from a project he embarked on in response to the 2008 loss of his father in which he created a quilt from his father’s clothes. Riley’s ultimate goal with the project is to eventually use his father’s entire wardrobe to create an extensive body of work. (Through August 26)

The Jarvis Rockwell Gallery will open “The Toy as Art,” an exhibit brings together the work of both local and regional “custom” toy makers. Artists on view: Bob Conge, Bryan Collins, Danielle Christensen, C. Ryder Cooley, Jason Martinez, Sarah Martinez, and Todd Robertson, among others.

studio21south opens “Black and White (more or less)” featuring paintings, drawings, and prints in generally, if not exclusively, a monotone mood, including woodblock prints and engravings by Frank Curran, a series of charcoal streetscape drawings by Bob Lafond and an installation of 150 drawings by Karen Walter. Urban nocturnes and other paintings by Thor Wickstrom will also be on view. 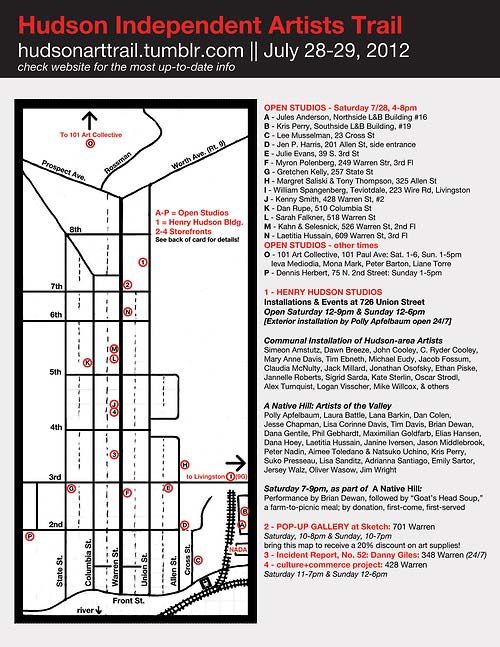 The Hudson Independent Artists Trail takes over downtown Hudson this weekend with a self-guided tour of artist open studios, pop-up galleries and more. At Henry Hudson Studios, there’ll be a communal installation by Hudson-area artists and a large group exhibition of artworks, as well as a performance by Brian Dewan on Saturday at 7pm.

Also on tap: NADA Hudson @ Basilica Hudson. A site-specific showcase of contemporary sculpture, installation and video featuring 48 artist projects in and around the Basilica.

And if that’s not enough, the inaugural exhibition for CR10, a new gallery and performance space in Linlithgo, opens with a reception on Saturday, July 28 from 4-6pm with an exhibition featuring a dozen visual artists as well as readings by novelist Maggie Estep and memoirist Richard Boch and a performance by New York City underground-rock duo Aliens.