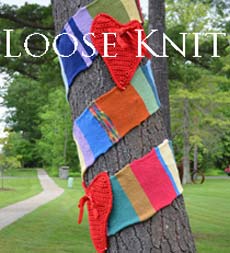 If you travel to the Lenox campus of Shakespeare & Company, you will notice that the trees, fenceposts, railing and even some rocks seem to have donned colorful fall jackets and scarves, all a way of marking the first reading in the 2012 Studio Series of play readings, Loose Knit by Theresa Rebeck. But there’s more to this story. Theresa Rebeck’s “Loose Knit” is under consideration for next season, along with four other plays to get readings this month at Shakespeare & Company. Already they are taking sides, with yarn bombings all over the S&Co Lenox campus.

Even scarier is the mischief the Moon for the Misbegotten partisans might be up to. That Eugene O’Neill play gets its reading on August 8, but they’ve already done their dirty work. Look at your August calendar and you will see there are two full moons bracketing the whole festival, on August 2 and 29, 2012. When people say “once in a blue moon” they are speaking to the rarity of the occurrence of a second moon happening in the same given month. We live in spooky times.

Now if you are not a Rebeck-watcher, here’s the scoop. She is a playwright to the tenth power. She penned Bad Dates, which was a big hit several winters ago, earning ShakesCo actor Elizabeth Aspenlieder a Nortie (Elliot Norton Award) for her brilliant performance.