Mayor Jennings, could you please extend the Alive at Five curfew?

That’s what I thought after a brilliant set by 2010 Grammy Award-winner Buckwheat Zydeco came to an end all too soon.

Stanley Dural, Jr. (aka “Buckwheat”) and his band could have easily played another hour – they were on a roll, and the crowd at the Corning Preserve’s Riverfront Park was with them for the ride to the bayous of Louisiana. My bet is that an 11-song set would be just a warm-up back home.

Befitting a legend with a generous heart, Buckwheat let his six-piece band get the spotlight first. They were dynamic, opening with an instrumental Hammond B-3 workout, then turning the reins over to guitarist-vocalist Paul Senegal, who played a rollicking rendition of Freddie King’s “I’m Tore Down,” complete with a play-the Strat-with-your-teeth solo.

Strolling out to “Soul Serenade,” Buckwheat strapped on his accordion, smiled to the crowd and proclaimed in English and Creole French that we were going to have some fun in Albany. He was in strong voice from the opening verse to “It’s So Hard to Stop,” which got the dancers animated and had the amphitheater singing along. “Ils Sont Partis,” the theme song of the band, gave solos to all: trumpet, both guitars, rubboard, five-string bass (Lee Allen Zeno was awesome) and drums. As expected, but still quite enjoyable, were sing-along nods to two legends, Fats Domino (a proud, soulful “Walkin’ to New Orleans”) and Hank Williams (a joyous “Hey, Good Lookin'”).

“Throw Me Something, Mister,” from the Grammy Award-winning “Lay Your Burden Down” (Alligator Records), brought a high-tempo thrill to the set that had a good number packed near the stage exclaiming various synonyms for “Wow!” Putting aside his accordion, Buckwheat sat down at the Hammond B-3, his first instrument dating back to his days backing Clarence “Gatemouth” Brown and Clifton Chenier. What followed was another extraordinary performance, “Encore featuring Organic Buckwheat,” from the album “Jackpot.” Buckwheat was having a blast, hitting bluesy swinging riffs like Jimmy Smith in his prime.

Closing out with “Jackpot,” Buckwheat’s joy was salient. “Everybody gets a blessing!” he announced at the start of the song. By song’s end, ten minutes later, thousands were ecstatic and clamoring for more. Maybe next time Buckwheat Zydeco plays Alive at Five, the event could be subtitled “until 9 (or 10) pm.” 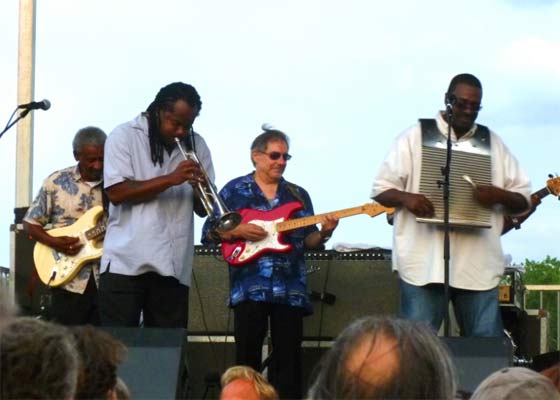 Larry Coryell, What Was the First Album You Ever Bought?