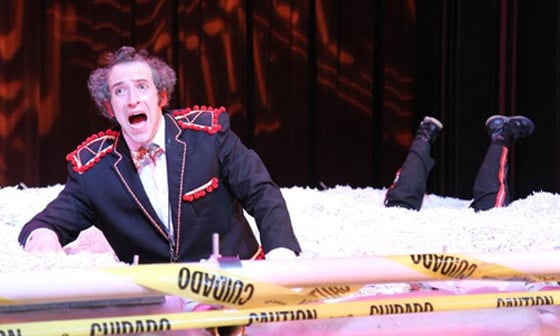 North Adams, MA – Slapstick troupe 500 Clown promises to make kids and adults alike giggle uncontrollably on Saturday, August 11, when the company comes to MASS MoCA’s Hunter Center with performances at 2 PM and 7 PM. By combining the elements of risk, action, and humor, 500 Clown has been surprising and thrilling audiences across the country and around the world for more than a decade.

Born in Chicago in 2001, 500 Clown is physical theater at its best. The company uses action-based performance, improvisation, and circus arts to tell long-form, dramatic stories that catapult the performers into both physical and emotional chance-taking situations. The Chicago Reader calls 500 Clown “insane, inspired, risk-loving, [and] intensely physical”. The group has performed across the world, including PS 122 in New York City, the Orange County Performing Arts Center in California, and the Midland Arts Center in Birmingham, England.

In Trapped, 500 Clown ricochets between planned elements and improvisation at breakneck speed to powerful effect. The remarkably clever ensemble is unexpectedly ensnared – trapped – in an innovative set piece, and hilariously tries to escape. Each clown-musician’s response spirals out of control, into slapstick mishaps and Vaudevillian turns, as they try to escape the trap they’ve set for themselves. All ages will appreciate the mix of high physicality, raw emotion, and powerful storytelling in 500 Clown’s Trapped.

WTF: Are the Berkshires ready for Katori Hall’s Satire on Race and Class? [Berkshire on Stage]