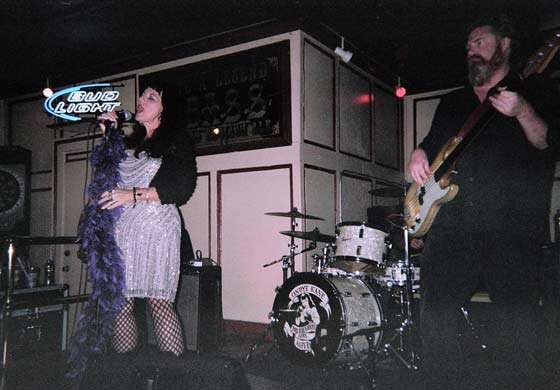 Exuding power, resilience, courage, optimism and a pure joy in living, Candye Kane’s voice rang through the length and width of Pauly’s Hotel in Albany. It was a Saturday night of blues music to spend with the self-described “toughest girl alive,” two sets that no one who attended will ever forget.

With more than 10 albums to her credit, Kane has a deep repetoire. On this particular night, in songs and stories, she often drew upon her experiences growing up in southern California – and especially the recent crisis she has faced – in candid, life-affirming ways.

In early 2008, Kane was diagnosed with a neuroendocrine tumor, a form of pancreatic cancer. Remission unfortunately proved to be brief, and on May 2, 2012, she underwent her second extensive surgery. On August 13, Kane received the San Diego Music Awards’ “Best Blues Album” honors for “Sister Vagabond” (Delta Grove Music) as well as its “Courage in Music” trophy.

Too often, blues music gets mistaken by the naive music listener as being depressing; nothing could be further from the truth. As Kane made it very clear in her performance and rapport with the audience of long-time fans and first-timers, blues is entertaining, honest and transcendent. “It’s for the groovy, hip people in the world,” remarked Kane at the end of the first set, pointing to her dear friends who had traveled hours to Albany just so their daughters could enjoy the show.

Following a swinging instrumental by the remarkable young guitarist Laura Chavez and telepathic rhythm section of Kennan Shaw (bass) and “Baldhead” Fred Rautmann (drums), Kane gingerly approached the purple boa-draped microphone, decked out in a silver sequined dress, fishnets, and knee-high black boots. With a wide smile beneath her black bangs and kudos for Chavez, she opened with the joyous “Hey! Toughen Up!” In the first verse, Kane set the tone for the night: this was not going to be a pity party, this was going to be a party. “White Trash Girl” quickly followed, bringing smiles to the crowd with its always sunny take on surviving poverty and hardship, and lead/rhythm patterns by Chavez that showed an affinity for John Lee Hooker and Magic Sam.

“I like a good old bar – it feels like we’re in one here at Pauly’s,” observed Kane to an appreciative audience before introducing her “dirty-love version” of Brenda Lee’s “Sweet Nothin’s” which had a swampy, Slim Harpo vibe to it. “Everybody Needs Love” felt like a sonic, inclusive hug from Kane with marvelous Stratocaster work from Chavez, who smiled at the band from underneath her black beret. This was just the warm-up.

After thanking the audience for coming out to support live music, Kane got big laughs when she suggested that anyone who wanted to buy a CD was welcome to do so: “No pressure or anything – it’s just that my grandmother’s having an operation…” Shifting to a serious tone, she introduced a “song of empowerment, my signature song” because “it makes me feel better.” Written in 2000, “I’m the Toughest Girl Alive” has taken on new meaning given her recent health crisis and recovery. As the song progressed, it had an elixir-like effect on Kane, who grew even stronger in voice and poise. Having toured many countries since her singing career began in the early 1990s, Kane sang “Ik Hou Van Je (I Love You)”, a jump blues featuring nearly a dozen different languages that coaxed a pair of couples out onto the small dance floor in front of the stage. “Walkin’ Talkin’ Haunted House” delved into a broken love affair in gritty, soulful fashion, with Shaw and Rautmann slicing and dicing time, while and Chavez played stinging solos that left the audience and even Kane herself agape.

The range of the first set continued to be impressive. “200 Pounds of Fun” brought some California sass and swing in its celebration of large women, and Kane hit the dance floor during Chavez’s wild solos to do the twist with some exuberant blues fans. Back up to the microphone, Kane saluted those in the audience who had survived cancer and offered her encouragement for all to do a “toxic inventory” and know that all obstacles the future may bring can be overcome. “Superhero,” a blues affirmation (“no way I’m laying down and dying!”) conjured up the spirit of Etta James with its swagger. “I Could Fall for You” was a slow-cooking, plaintive number about being wary of getting one’s heart broken; in contrast, “You Need Love”, a
hit for Muddy Waters (and later infamously ripped off by Led Zeppelin, as Kane pointed out) was a carpe diem ode to lust, set in rather imaginative fashion to a guitar figure more akin to a Howlin’ Wolf song. Wryly, Chavez even added a brief snippet of Jimi Hendrix’s “Who Knows” into her vibrant solo.

After a well-deserved break for hydration, a line of album/poster/t-shirt sales, and autographs and photos, the band returned with a pair of energetic instrumentals. Kane, energized by the crowd’s appreciation, bounded up to the spotlight and delivered another astounding set. “Put It All in There,” from her 1992 debut “Burlesque Swing,” was a classic double entendre that picked up where the first set left off. “I’m Lucky,” a love song, became a declaration of gratitude to the patrons. “Love Insurance,”
written after Kane’s initial cancer diagnosis, playfully mused about a world in which one could get a stipend for damages when a romance goes awry. Covering Guitar Slim can be daunting, but that was not the case for Kane, who spoke of how Clifford Antone – whose legendary Austin club honored the legends of the blues and nurtured the next generation – always wanted her record “I Done Got Over It.” Somewhere, the late Antone had to be smiling because the performance of this song about overcoming heartache was heavenly, with Kane in intrepid voice, Shaw and Rautmann deep in the pocket, and Chavez playing lights out.

A trio of songs from the superb “Superhero” CD kept the party going, and the crowd was still asking for more. Kane obliged, offering a generous portion of jump blues, “All You Can Eat (And You Can Eat it All Night Long)” from “Diva La Grande,” and letting each member of her talented band get a solo spotlight and prompting the audience to sing the chorus. Wow!

It is safe to say that this is the best show I have attended in 2012.

Buy Candye Kane’s albums, play them for family and friends, and look forward to her next visit to the Capital Region. Viva Candye Kane! 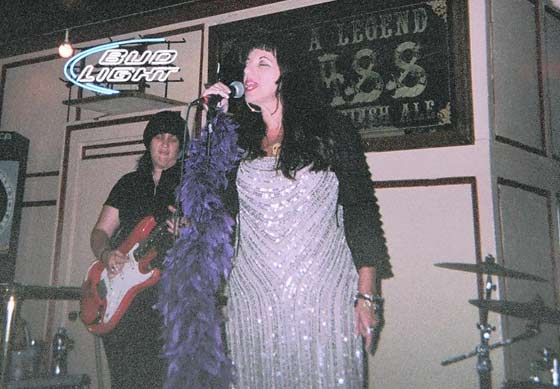 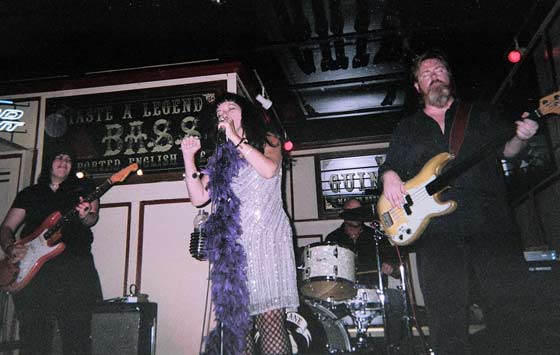 Bob Weir Heads Back to Woodstock