Burns and Cane Review: “A Funny Thing Happened on the Way to the Forum” at the Theater Barn [Berkshire on Stage]

by Gail Burns and Roseann Cane. For the Berkshire-Capital region’s most comprehensive listing of theatre offerings visit GailSez.org. 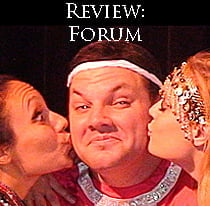 Roseann Cane: A Funny Thing Happened on the Way to the Forum first opened on Broadway in 1962 and has enjoyed many incarnations, including two revivals on Broadway (one in the ’70s and one in the ’90s), over the last half-century. I would have loved to see the Cantonese version produced in Hong Kong just a few years ago! It’s easy to understand its popularity. Smart, bawdy, upbeat…what’s not to love? And the show has a solid pedigree, thanks not only to its esteemed creators, but because it’s based upon the works of the Roman playwright Plautus, and celebrates his stock characters—the cunning slave, the dirty old man, the braggart warrior—as well as his joyful vulgarity.

Gail Burns: When I told a friend I would be seeing/reviewing ……Forum I was asked if I wasn’t heartily sick of it, and I answered no, for all the reasons you have outlined above. I have seen many productions, but three stand out in my mind as really special: the all-male version at the Williamstown Theatre Festival in 2010, starring Christopher Fitzgerald; the 2007 production starring Jim Charles at the Cohoes Music Hall; and the 2002 production at the Theater Barn starring Matthew Daly and Anthony Devine. So I was obviously very excited to see what the Barn would do with this show in 2012.

But I have to say that I was disappointed from the moment I entered the theatre. I remembered Abe Phelps wonderfully colorful set from 2002, and this time he produced nothing but grey monoliths.

Won’t Forget, Can’t Regret What I Did for Love at Mac Haydn Theatre…

Robert Dubac’s The Male Intellect: An Oxymoron? On Sale Sunday

Won’t Forget, Can’t Regret What I Did for Love…

Robert Dubac’s The Male Intellect: An Oxymoron? On…