Out touring in support of his brilliant album, The Story Of Light, Steve Vai’s guitar pyrotechnics never strayed too far from the composition’s melody line at The Egg.

He’s the closest thing there is to his generation’s Jeff Beck – except when he’s doing the Stanley Jordan thing (both hand’s 10 fingers a tappin’ the strings) on the fretboard. Otherwise, his eyes are all over the place – except on the guitar.

In fact, he wields it like a toy, bending it every which-way. If it weren’t for the strap attaching the guitar to his body, it would be interesting to hear him in outer space, where there is zero gravity.

Actually, things probably wouldn’t be very different. Vai is a master of his instrument, tutored by the incredible Joe Satriani and polished to be a master by Frank Zappa.

It doesn’t get much better than that…

What made the show over-the-top unique was the presence of harpist – stringed harp, like angels play, not the Mississippi saxophone kind – Deborah Henson-Conant sharing fragments of the limelight with Vai.

In her own right, she is a master of her instrument. This time out Henson-Conant had a portable version of her instrument strapped to her shoulder and waist, wielding it like a blow torch, spraying hot stringed notes all over the stage and out into the audience in every direction.

Meanwhile Vicci Martinez delivered a strong and emotional set, filling in as a replacement for Beverly McClellan, who dropped off the bill due to illness. 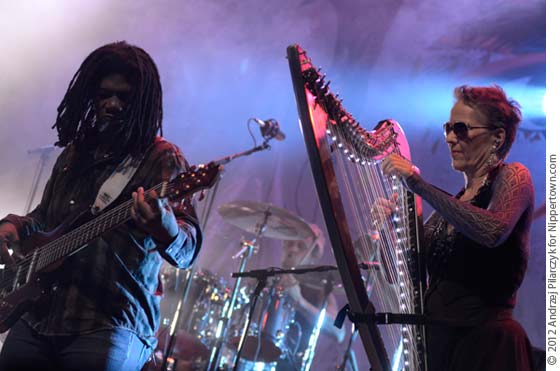