I told my wife Shelly that the interviews with 25 classmates from the Niskayuna High School Class of ’62 is going to surprise a lot of people when the film, “Turning Pages,” is previewed at Proctors in Schenectady at 2pm on Saturday (September 29). “You know, this isn’t exactly ‘Leave It to Beaver,’” I said. She shot back, “No, it sounds more like ‘Nightmare on Elm Street.’”

Fifty years – half a century! I can’t believe I’ve been an adult for that long.

Perhaps I should say, I can’t believe I’ve been running away from adulthood for that long.

I was walking down stairs at the gym yesterday after doing my time on the exercise bike and saw an elderly woman coming up. She was wearing an RPI ball cap – with the visor facing forward, I might add – and her watery eyes met mine. My first thought was here is a kindly old grandmother doing her exercises, and I smiled and nodded. She looked me squarely in the eye and said, “I feel your pain.” It suddenly dawned on me that we were contemporaries, and the pain I felt from my arthritis must have been palpable to her.

“Turning Pages” is a 90-minute film produced by four of us from the era that the Who sang about in “My Generation.” We toured nine states and 23 separate locations from San Diego to Tampa, Salt Lake City to Boston in a five-month odyssey re-uniting for a day each with people with whom we’d gone to high school.

In the process we discovered who we were and who we are – after our lives have been impacted by the Kennedy assassination, Vietnam, feminism, 9/11. But more important than that, we discovered we’d each impacted the world as much as the world has impacted us. We are war babies, pre-boomers who haven’t even been given a name. One journalist we interviewed called us “the breakout generation,” the first group of young adults who refused to color within the lines, refused to stay within the box. We pulled the cork from the bottle and let the genie out. 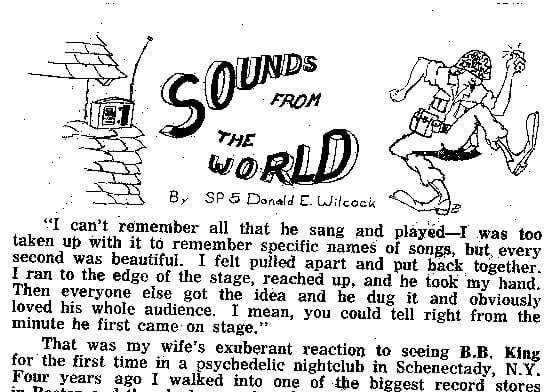 For me personally, it was an opportunity to confront my mortality head on. For most of those 50 years I’ve been a music journalist. I started writing about underground rock in Vietnam for The Army Reporter. “Sounds from The World” was a Reader’s Digest-style weekly blog, if you will, about what was happening in the real world. My audience was grunts risking their lives in the rice paddies. A wolf in the chicken coup, I was bringing news of the counter culture and underground to guys who desperately wanted to be there and not where we were. I realized that my music columns were a lifeline to my own sanity. And I never looked back. For 44 years I’ve written at least one music column a week and interviewed more than 4,000 artists. I started out risking my life writing about styles of music that ended up saving my life on more than one occasion.

So why look back now?

I couldn’t get the story of Janis Joplin’s Port Arthur reunion out of my head. Most know the story of San Francisco’s highest profile psychedelic artist’s attempt to return to her hometown in Texas, thinking she’d be the conquering superstar. But in the eyes of her hometown family and friends she was a cartoon making a mockery out of their white picket fence culture. I have never doubted that her eventual death from a drug overdose was due as much to her heartbreak over that reunion as it was to the fast-lane lifestyle she led in the rock world.

Could that happen to me 50 years after leaving the proverbial gated community of Niskayuna for the fast lane of pop music, blues and Americana journalism? A world that disobeys the rules of aging? Where else but in music are teenagers the most successful age group? Or contrary to that, where else are gladiators who make it into their 70s, 80s and even 90s – I’m thinking the Rolling Stones, Buddy Guy and B.B. King – treated as icons?

I ran away from the “Leave It to Beaver” Niskayuna to find the real world, and now I was determined to go back and see what happened to those who bought into that paradigm.

I was shocked at what I found.

The first-time film producer and fellow classmate Bob Van Degna owns a ranch in Arizona and ropes cattle at rodeos. Anna VA Polesny did many of the interviews with me and is the glue that held this pilgrimage together, setting up the interviews and doing publicity. She’s a fine artist, a mother and a Czech refugee who walked to freedom from Czechoslovakia to Germany with her mother when she was five years old. Randy Johnson is a human relations veteran who escaped 9/11 because he didn’t happen to be at work on the top floor of the Twin Towers that day.

A more disparate crew you could not imagine. And yet together we criss-crossed the country and were given unparalleled access to the inner dreams and heartbreaks of a forgotten segment of society that’s rarely given voice. “Turning Pages” started out to be a high school yearbook half a century after graduation. It evolved into a snapshot of a generation and finally transpired into the collected wisdom and warmth for everyone who espouses the American dream.

“Turning Pages” is a how-to (and in some cases how-not-to) primer for our children and grandchildren. As my friend George Scism says, there are no handbooks for parenting, but if there ever is a “Parenting for Dummies” textbook, this could be the DVD to accompany it.

I won’t spoil the surprise by revealing all the fascinating stories we uncovered. You’ll just have to come and experience it. Suffice it to say, this pilgrimage was as exciting to me as my trip to London 21 years ago when I was researching my book on Buddy Guy with nightly trips to Royal Albert Hall hanging out with Clapton, Bill Wyman and Jack Bruce.

The film, previewing in Proctors mainstage, will be followed by a question and answer session and a wine and cheese reception. “Turning Pages” is dedicated to Vietnam veterans. In the audience will be John Iannucci, a platoon sergeant who was with Lt. Bob Cragin, our only classmate killed in Vietnam. My interview with John was the single most moving interview of this odyssey which has been edited down from 25-plus hours to 90 minutes.

“Turning Pages,” a documentary film featuring interviews with 25 members of Niskayuna High School’s Class of ’62, will be screened at Proctors in Schenectady at 2pm on Saturday (September 29). Admission is free.