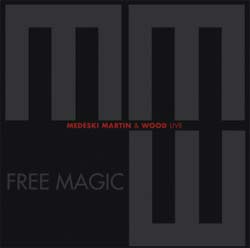 Even though Greater Nippertown gets no mention in the liner notes to Medeski Martin & Wood’s latest disc Free Magic, we were one of a select set of guinea pigs the powerhouse trio used to test-drive the all-acoustic concept that will be on display this Saturday night at College of St. Rose’s Massry Center for the Arts in Albany. In fact, we got two bites of this apple – one in 2006, the other in 2007. Both shows were at The Egg’s Hart Theatre, and both shows made my Top 10 Concerts list for that respective year.

The thing is, though, while the 2006 show was one long, raucous two-set grooveathon – the legs on John Medeski’s Steinway grand piano nearly gave out during a blinding take on Ray Charles’ “What’d I Say” (and, for once, I’m not speaking metaphorically) – the 2007 show was all about stretching the outside of the envelope until that sucker screamed for mercy. That tone is eminently reflected on Free Magic, and answers the main question I asked when I first heard MMW was going to play an all-acoustic show: “How are they going to do without half their instrumental arsenal?” The answer? “Swimmingly!”

The opener “Doppler” has Billy Martin doing his voodoo on balaphone (an African xylophone) while Medeski explores the boundaries of Melodica and toy piano; Chris Wood bows a deep, dark in the background, and the result is this fragmented, mystery-driven piece of African diaspora that you just have to sit back and goggle at. Before you know it, though, Wood starts to hit the bottom, Medeski smoothly switches over to Ramsey Lewis mode, and we’re grooving high on an old-time soul-jazz sound that will have you dancing whether that was your plan or not.

It’s all about the intros on Free Magic, although the introduction to each piece is not necessarily indicative of where the piece will go. The title track (which precedes Medeski’s Chopin-inspired “Ballade in C Major”) is just what it says: An example of the kind of mind-bending improvisational alchemy that 20 years of creative partnership can conjure up – with or without electricity. Although “Blues for Another Day” does eventually become a semi-standard blues tune, it starts out with a cataclysmic avant-garde fusillade from Medeski that his partners answer with extreme enthusiasm. Medeski introduces a borderline-sinister “Where’s Sly” with a little bit of in-the-clear darkness, but the juicy bit is at the end, where Martin favors us with a nearly-eight-minute drum solo that has you hanging on every beat.

In comparison to what precedes it, the closing tune is pretty pedestrian… or as pedestrian as a medley of Charles Mingus (“Nostalgia in Times Square”) and Sun Ra (“Angel Race”) can be, Wood’s work is phenomenal throughout Free Magic, but it’s the way he sinks his teeth into “Nostalgia” that makes me hope he never picks up a Fender again. That’s an unreasonable request, I know, given the sumptuous electric work MMW has given us, both on their own and with uber-guitarist John Scofield. At the end of the day, Free Magic is just one more piece of evidence that proves Medeski Martin & Wood is the 800-pound gorilla we’ve all heard about: They can (and will) do anything they want to do, and when they do it live, it is a sight to see.