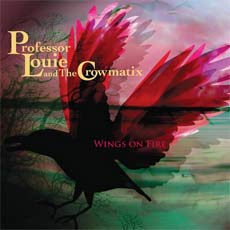 The death of Levon Helm earlier this year left an enormous, unfillable hole in the Woodstock music scene, but if you’re looking for new music steeped in the Band tradition, look no further than Professor Louie & the Crowmatix.

The long-running Woodstock-based outfit has issued a new album, and it rumbles righteously through the Americana-rock sounds of the Band-and-beyond with authority. The album is dedicated to “our musical mentors Levon Helm and Rick Danko,” and it even closes out with a cover of “4% Pantomime,” the classic Band/Van Morrison collaboration from Cahoots.

Of course, Professor Louie and his cohorts are no johnny-come-latelys when it comes to the Band. Louie (aka Aaron Hurwitz) was at the helm as producer for the last batch of post-The Last Waltz Band albums (including the vastly under-rated Jericho), as well as solo albums by Rick Danko and Garth Hudson.

The Crowmatix’s new album – recorded at Louie’s LRS Recording Studio just outside of Woodstock in Hurley – kicks off with the barrelhouse piano boogie of “Down at the County,” and what follows spins across the Americana landscape touching down on the blues-laced “Uncommon Love” (underpinned with Louie’s humming Hammond organ) and the more reflective blues ballad “Time Moves On,” as well as the slinky, sashaying Latin-rock groove of “Open Hand, Open Heart” and a distinctively Cajun bayou-spiced cover of George Jones “Color of the Blues.” All are fuelled by the trademark Woodstock loose-but-in-the-pocket groove, thanks to drummer Gary Burke, bassist Frank Campbell and guitarist Josh Coslow.

The Crowmatix’s Miss Marie takes over the lead vocal chores for “Top of the World” and adds some sweet whistling to the “The Bird Song.” She also tag-teams with Louie on the microphone for a duet of “Center of Your Circle,” an empowering ballad somewhat reminiscent of Dylan’s “Forever Young.”

On select songs throughout the album, a trio of additional guest guitarists step up to the plate, including Michael Falzarano, Vito Petroccitto and former Van Morrison axman John Platania.

“High Tech Wreck” – co-written by Louie, Miss Marie and the Fugs’ Ed Sanders – is something of a light-hearted novelty tune about not being able to keep up with the rapidly changing technology of the 21st century, but the accordion-powered, New Orleans-flavored second-line strut of the rhythm section transforms the tune into more than just a throwaway album-filler.

The album’s title track is jumpin’ boogie that sounds like it was conjured up in a late-night studio jam session, but unfortunately, just when you think it’s going to take flight into the stratosphere, it layers on some superfluous vocals rather than allowing the band’s considerable instrumental firepower to explode.

“Moment in the Sun” is probably the album’s oddest entry, and while sonically it seems to fit right in with the other dozen tracks here, compositionally it takes off in more of a British Invasion power-pop vein. Heck, I’d love to hear Gerry & the Pacemakers take a shot on this one because it’s a damn good song, but it just doesn’t seem to coalesce with the rest of this album.

Professor Louie & the Crowmatix rumble into Caffe Lena in Saratoga Springs at 8pm on Saturday (October 20). Tix are $20 in advance; $22 at the door.