The Nitty Gritty Dirt Band didn’t dip all the way back to the jug band music of their ’60s albums, but they never-the-less covered quite a wide swath across the landscape of Americana music during the inaugural concert of the Troy Savings Bank Music Hall’s new fall season.

Led by guitarist-vocalist Jeff Hanna, the Dirt Band slid into the evening’s festivities with an easy-going rendition of Bob Dylan’s “You Ain’t Goin’ Nowhere,” and they took off from there, covering lots of musical ground. With “An American Dream,” they eased through sun-baked, Jimmy Buffett-like territory. They fired up Louisiana bayou sounds with the back-to-back Cajun swamp-stompers “Bayou Jubilee” and Hank Williams’ “Jambalaya.” They took a more mainstream country-pop approach with the twang-fueled romp “Fishin’ in the Dark,” as well as the ballad “Bless the Broken Road” (the Rascal Flatt smash hit which Hanna co-authored, but keyboardist Bob Carpenter sang in a perfectly pared-back rendition).

With drummer-harmonica man Jimmie Fadden taking over the lead vocals, they boogied through the old Canned Heat blues, “Goin’ Up the Country.” They blazed their way through a bit of bluegrass with Jimmy Martin’s “My Walkin’ Shoes Don’t Fit Me Anymore.” And they ventured into the Grateful Dead’s jam-happy turf with “Ripplin’ Waters,” highlighted by muscular, climactic, extended instrumental interplay.

And of course, they trotted out their biggest hit, the sublime “Mr. Bojangles,” which still sounded surprisingly fresh after all these years. It was clear that NGDB weren’t just phoning it in at the Music Hall.

For a four-piece band, their sound was consistantly full and varied, thanks in large part to multi-instrument master John McEuen, who spiced up nearly every song with some flashy playing on fiddle, mandolin, guitar, banjo and/or lap steel.

It was a bit disappointing that they didn’t dip a bit more into the repertoire of their landmark 1972 album, Will the Circle Be Unbroken, but when they finally did get around to the album’s title track for their encore, they neatly paired it in a medley with the Band’s “The Weight,” capping off the evening with a tribute to three roots-music greats who we lost this year – Earl Scruggs, Doc Watson and Levon Helm.

It was probably the first time in Music Hall history that a nine-time Grammy Award-winning band was in the opening act slot, but long, tall Texan Ray Benson and Asleep at the Wheel kicked off the evening’s festivities with a primo hour-long blast of their trademark western swing and boogie woogie. With drummer David Sanger’s Lone Star State-shaped cymbal sitting mounted center-stage high above the band, the seven-(and sometimes eight)-piece band proudly paid tribute to the great Bob Wills with a string of his vintage tunes, including “Cherokee Maiden,” “Miles and Miles of Texas,” “Faded Love” and “Ida Red.”

It wasn’t all about Wills, however, and during “Route 66,” the Wheel also conjured up echoes of Manhattan Transfer, as they passed around the lead vocal chores from Benson to Elizabeth McQueen to fiddler Jason Roberts before coming together with some mighty impressive jazz harmonies.

SECOND OPINIONS:
Excerpt from Brian McElhiney’s review at The Daily Gazette: “Hits such as ‘Mr. Bojangles’ and later on, ‘Fishin’ in the Dark,’ got the crowd riled up, with the band managing to add a few new wrinkles to the old favorites. ‘Ripplin’ Waters’ midway through the set turned into an extended jam of epic proportions, going from an upbeat lilt to a soulful conclusion thanks to Carpenter’s delicate piano playing. But perhaps best of all was another of the band’s hits, ‘Workin’ Man (Nowhere To Go),” also played toward the middle of the evening. The song’s working-class message bears weight today, and Hanna in particular delivered a passionate performance as the audience, unbidden, sang along.” 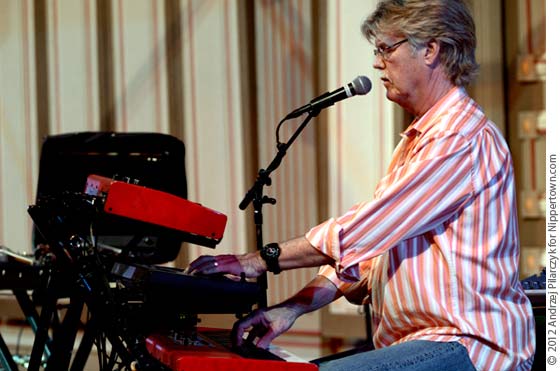