Five amazing discs that made my annual trek up the East Coast even better than it usually is:

BRANFORD MARSALIS QUARTET
Four MFs Playin’ Tunes
(Marsalis Music)
“Nothing to see here; everything’s under control.” That’s the underlying message of the title to the first Branford Marsalis Quartet disc without longtime drummer Jeff “Tain” Watts. That’s a big loss to the bottomless musical hive-mind that is the BMQ, but between their rip-snorting Proctors show in February and the cockeyed bop that drives MFs whirling opener “The Mighty Sword,” it sounds like 20-year old wunderkind Jason Faulkner has been assimilated just fine, thank you very much. He bubbles and bashes and bangs, while volcanic pianist Joey Calderazzo shows he’s light-years from the time when he was “that new guy” who replaced the late Kenny Kirkland. Faulkner certainly hasn’t put a hurt on Branford, whose soprano sax is just as achingly beautiful on bassist Eric Revis’ composition “Maestra” as it is on Calderazzo’s “As Summer Into Autumn Slips”; on the right-brain side of the scale, Marsalis’ fulsome tenor sax gives us all a very cool ride on dynamic send-ups of Thelonious Monk’s “Teo” and Chet Baker’s “My Ideal.” It’s ridiculous to compare Faulkner to Watts, anyway, because that’s like comparing Andrew Luck to Peyton Manning. Like Luck, Faulkner’s got a major-league skill-set, as we can see during the opening and close of Branford’s own muscular tune “Whiplash.” As with Luck, the proof will be in what lessons Faulkner learns in these next few years, and how he applies them to whatever Marsalis throws at him. Until then, everything’s definitely under control, and sounds pretty freaking awesome, to boot! 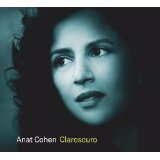 ANAT COHEN
Claroscuro
(Anzic Records)
Speaking of musical hive-minds, February was a great month for Greater Nippertown jazz fans, because that’s when another reed wizard – Israeli native Anat Cohen – brought her scintillating quartet to The Egg’s Swyer Theatre. Jason Lindner’s “Anat’s Dance” is the opening track of Claroscuro, and it was the opening tune of that blistering 90-minute show, and the studio version packs every ounce of punch we heard at the Swyer: Lindner rocks the house with a piano solo that answers Cohen’s passionate clarinet fusillade note for note, while drummer Daniel Freedman’s rideout solo simply rocks. Omar Avitel played bass at the Swyer show, but Joe Martin’s foundation work definitely does the job on the disc. Other pieces from the Swyer show dot Claroscuro, including a swirling take on Milton Nasciemento’s “Tudo Que Voce Podia Ser” and Abdullah Ibrahim’s ballad-cum-gospel prayer “The Wedding.” But there are also little gems we never saw at the Swyer, and they make this disc even more valuable. Cohen takes us back to old New Orleans for a Preservation Hall-style version of “La Vie en Rose” that features great trombone (and a deadly Louis Armstrong impression) from Wycliffe Gordon, while Paquito D’Rivera doubles our clarinet pleasure by teaming with Cohen on Artie Shaw’s aptly-named funeral march “Nightmare.” While the version of “All Brothers” on Freedman’s epic release Bamako by Bus has the world-music vibe it needs to be perfect, Cohen’s version here deserves a nod for its expansive elegance – and no, that’s not a contradiction! Check this (and everything else) out on Claroscuro, and you’ll be as enchanted as I am.

RONI BEN-HUR/SANTI DEBRIANO
Our Thing
(Motema)
THE BRAZILIAN TRIO
Constelação
(Motema)
I’ve put these two discs together because they share one sensational element – the magic of Brazilian percussionist Duduka da Fonseca. He’s one of those drummers I eat up with two spoons because of the tremendous work he does around the edges, adding light touches and subtle undertones to make a tune even better. He can surely bring the noise, as he does during his solo on Ben-Hur and Debriano’s righteous take on Monk’s “Green Chimneys,” but before that solo, he was dotting the piece with hissing brushwork and rattling percussion that drove Ben-Hur’s hurtling guitar solo into another gear; da Fonseca dials it back even further for Debriano’s quietly intense bass solo. Together, this trio makes the underlying penalty on Irving Berlin’s “Let’s Face the Music and Dance” seem like a welcome prospect, and there’s plenty more dancing where that came from on Debriano’s tasty “Afroscopic” and Ben-Hur’s bopping “Earl’s Key.” Little things mean a lot on Our Thing, and that’s because of three stellar musicians who make little things seem massive.

Our Thing also includes a suitably subtle reading of Antonio Carlos Jobim’s “Fotografia” – which leads us neatly to Constelação, the second disc for the Brazilian Trio and their first for their new label, Motema. They’re a Grammy-nominated outfit that also features pianist Helio Alves and bassist Nilson Matta, and Jobim is a heavy presence throughout the disc, with the trio creating stellar versions of Jobim tunes “Luiza,” “O Boto” and “Quebra Pedra.” But the Trio also applies their own brand of artistry and subtlety to other artists’ material: Their take on Alfredo Cardim’s title track brings you into the sultry world Jobim wrote about, but brings a dance to the romance Jobim’s music popularized; literally on the other end of the spectrum, da Fonseca’s roiling drum break sets the tone for a very cool run on Cedar Walton’s “Bolivia.” The Trio’s own material stands toe-to-toe with the classics, as Alves’ “Bebe” showcases the pianist’s velvet touch and Matta’s “LVM/Direto Ao Assunto” is a terrific mash-up of two pieces from two different times in the bassist’s life. Like everything else on Constelação, there’s an element of the personal that really invites you in to what the artists are playing and feeling, and the Brazilian Trio’s gamut of emotions truly runs from A to Z. 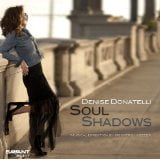 DENISE DONATELLI
Soul Shadows
(Savant)
Sometimes the teaming of an artist and a producer sparks an alchemy that truly makes gold rain down from the sky. That’s what happened when vocalist Denise Donatelli got together with keyboardist-arranger-producer Geoffrey Keezer, and Soul Shadows is the third in a series of glowing gold nuggets that has come from their partnership. Donatelli famously said she “can sing anything,” but what she should have said was she can sing anything and make it her own – and I mean anything: Donatelli hits a Latin-flavored tango take on the standard “All or Nothing at All” out of the park before Shadows is even a minute old, but two songs later she’s having fun with the self-deprecating humor of Pomplamoose’s YouTube hit “Another Day.” Keezer loves to throw curveballs at Donatelli, too, so he serves up the doomed romance of “A Promise (Someplace Called Where)” which mixes Wayne Shorter’s music with Dianne Reeves’ lyrics, and then takes us back to Brazil through the disc’s title track, which Bill Withers recorded with the Crusaders way back in the day; Keezer literally dreamed of dong the latter piece as a bossa, and the results are impeccable. So’s the duet Donatelli and New York Voices’ member Peter Eldridge perform on Eldridge’s dysfunctional family portrait “Postcards and Messages”, which Keezer wraps in a lovely classical/jazz tapestry. Soul Shadows hits you with moment after moment of singular beauty, each one wrapped in a beautifully crafted package that’s a joy to open. May Donatelli and Keezer keep creating together, because everything they’ve given us is rich with light and heat, and that is very cool.