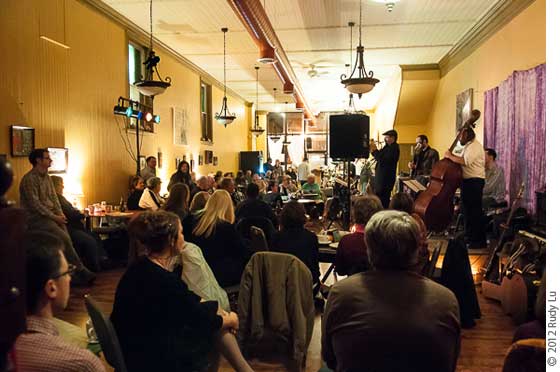 The Arch Stanton Quartet – featuring trumpeter Terry Gordon, guitarist Roger Noyes, bassist Chris Macchia and drummer Steve Partyka – played to a full house at the More Bread & Jam Cafe in Cohoes last weekend in celebration of the release of their debut CD, “Along for the Ride.” (Read our review of the new album here.)

At the performance, it was also revealed that the band would soon be headed to Cairo. No, not Green County. Cairo, Eygpt.

Former ASQ drummer Jim Ketterer is currently based in Egypt, where he is the director of the educational organization AMIDEAST. And last Friday evening, Ketterer announced that ASQ will perform at the Cairo Jazz Festival in March, co-sponsored by the Prince Alwaleed Bin Talal Bin Abdulaziz Alsaud Center for American Studies (CASAR) and AMIDEAST/Egypt. In addition to performing at the festival, the band will also conduct a master class for students at the American University in Cairo. Additional performances will be announced shortly.