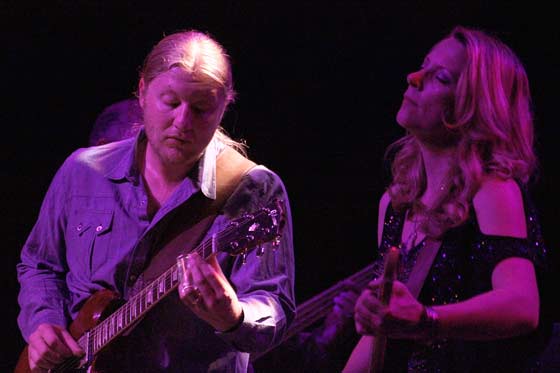 The Tedeschi Trucks Band returned to Nippertown for a second headlining appearance in a little over a year – and that does not include their set at Mountain Jam this past spring. If last year’s show at The Egg was a home run, this month’s performance at the Palace Theatre in Albany was a grand slam. The 11-piece band wasted no time getting started with their version of George Harrison’s “Wah Wah,” but it was the full throttle Susan Tedeschi vocals and the blistering Derek Trucks guitar leads on the second number, “Don’t Let It Slide,” that set the tone for the evening.

Last year, the horns were primarily used to add some color, but this year, all three horn players -particularly Maurice Brown on trumpet and Kebbi Williams on sax – had opportunities to shine, and that was clear by the end of the second tune. From there, it was on to “Midnight in Harlem,” beginning with a brief solo by Mr. Trucks (who spliced a little sitar feel with a couple of quotes from “Little Martha”) and then Ms. Tedeschi’s soulful vocals (perfectly capturing the song’s feeling of desperation), aided by some spare, but essential, playing by Kofi Burbridge on keyboards.

As a result of the departure of Oteil Burbridge in October, the one new face in the band was George Porter Jr., from the iconic New Orleans band the Meters, on bass. Porter’s playing fit like he had been a member of the band since its inception instead of his one-week stint, and his vocals coupled with the second-line feel that he gave “Ain’t No Use” was one of the evening’s highlights.

Porter was not the only band member that provided lead vocals; Mike Mattison turned in one of his trademark gritty performances on “You Get What You Deserved” that was accompanied by another scorching solo from Trucks. There were more highlights than you could keep track of, but Elmore James’ “The Sky Is Crying,” Tedeschi’s vocals on John Prine’s “Angel From Montgomery” (that had a chorus of “Sugaree” in the middle), the familiar beginning of Stevie Wonder’s “Uptight” that they proceeded to deconstruct and end with a Tyler Greenwell and J.J. Johnson drum duet – all must be included.

However, the real highlight was when they took us to the church of rock and soul and cleansed our spirits with “Bound for Glory” and the evening’s masterpiece “Wade in the Water” that had Ms. Tedeschi, Mr. Mattison, Mr. Porter and Mark Rivers each taking vocal turns to lead the congregation, as the band kept raising the ante with each chorus. The standing ovation and roar of the audience after this number was the loudest of the many standing O’s they received during the two-plus-hour set.

This is a band that is now thoroughly road-tested and seems to have no limits. The two leaders are still very much front and center, but since their show at The Egg they seemed to have figured out how to incorporate more of each band member’s strengths into the musical stew. During the course of the evening they gave us rock, blues, soul, funk, gospel, a little jazz and even a touch of doo-wop. I can’t wait to see what turns in the road lay ahead for them.

Opening the evening was Charlie Mars whose charismatic persona quickly won over the audience. This is not a simple matter for a relatively unknown opening act in a theater the size of the Palace, but by late in his short set he had the audience in the palm of his hand during the performance of his song “How I Roll.”

SECOND OPINIONS:
Fred Rudofsky’s review at Nippertown
Excerpt from David Singer’s review at The Daily Gazette: “The problem with the Tedeschi Trucks Band is you don’t get enough Derek Trucks, and you don’t get enough Susan Tedeschi. Of course that’s a lose-lose attitude, because most in the filled Palace Sunday night seemed to see it the exact opposite way and relished whatever they got from both leaders. For those who come to see Trucks light it up — that is, put chills down your spine like very few musicians can do — they got it. Sunday night was the final stop of the tour — their last show of the year — and Trucks unloaded on the second and third songs to get that work done early. He did this again a few more times later in the show.”