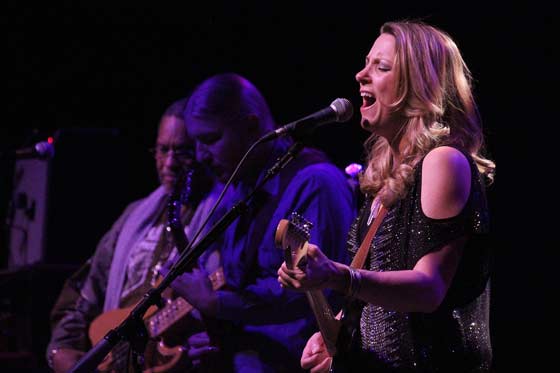 When a band comes to the end of a tour, there are two potential scenarios: fatigue results in a perfunctory set; or, the thrill of closing on a high note wins out. Fortunately, the latter was the case for the Tedeschi Trucks Band, which played a high-octane, incredibly diverse show for over two hours at a packed Palace Theatre on a recent Sunday night.

Respectively, husband and wife Derek Trucks and Susan Tedeschi have built loyal followings in the Northeast in the past decade. Trucks led a band that averaged over 250 shows per year at one point, in addition to playing select shows with the Allman Brothers Band. Tedeschi led her own band out of Boston for many years before she and her husband started a family and set up home in Florida. Joining forces, the couple have released two excellent albums in the past two years, Revelator and the live Everybody’s Talkin’.

With a colorful aboriginal design as their backdrop, the band (two drummers, three horn players, one keyboardist, legendary Meters bassist George Porter, Jr., and guitarists Trucks and Tedeschi) took the stage to a roar unlike any heard in recent memory at the Palace. The love was mutual from the word go. A radiant Tedeschi stepped to the microphone, and the band ripped into a superbly moving take on George Harrison’s “Wah-Wah.” Vocal interplay and a beautiful slide break made “Don’t Let Me Slide” a worthy follow-up, and “Midnight in Harlem” mixed soulful sounds from the West and East. Mike Mattison, lead singer with the Derek Trucks Band, joined Tedeschi at center stage for a funky, waltzing “How It Feels,” his rasp and her sweet alto blending perfectly.

George Porter, Jr. took the spotlight for a vibrant take on “I Just Kissed My Baby,” a deep cut from the Meters, trading verses with a beaming Tedeschi, letting Kofi Burbridge hit the keys and Maurice Brown shine on trumpet solos. Trucks and Tedeschi brought some fine guitar interplay to the next three songs – “Love Has Something Else to Say,” “Ball and Chain” and “Get What You Deserve” – his keening slide carving the air and her solos punching the gut. The next number was done without horns or backing vocalists, and Tedeschi belted out bad-ass lyrics about love and jealousy with a sly grin on her face. The crowd roared its approval, the full ensemble returned, and Porter pulled another cut from the New Orleans funk treasure trove, “Ain’t No Use.” Every musician got a nod to play some hellacious licks on this Meters classic, and Porter’s joy at the performance was as undeniable as the bass lines he was throwing down and picking up.

“Old Time Lovin'” was a wonderful surprise, with trombonist Saunders Sermons taking the vocal lead and exhorting the crowd to appreciate how “music will move your feet.” (Sadly, the Palace staff put a stop to much of the spontaneous dancing that erupted in the front rows and aisles – yet anyone half-tipsy on Miller could take photo after photo with a smartphone waving high. Really?!). Old school blues also got the spotlight, a tour de force nod to Elmore James with “The Sky Is Crying” that alternated quiet and full-volume solos by Trucks that left a few hundred mouths agape. Stevie Wonder’s “Uptight” was an epic showcase for all, especially drummers Tyler Greenwell and J.J. Johnson. “Bound for Glory” lifted the audience up; Tedeschi vocalized like it was a Sunday night in church, complimented by her husband’s smokin’ slide riffs, which seemed to flow right from his soul.

Most bands would call it a night on such a high point, but not this one. A three-minute ovation coaxed them back on stage, and the audience was repaid with a mini-set of encores that took everyone higher. Tedeschi’s take on John Prine’s “Angel from Montgomery” was poignant; she became the old woman in the song who longs for just a few more precious moments before she departs this life. “Wade in the Water” was heavenly, a showcase especially for vocalist Mark Rivers and the horn section’s Sermons, Brown and saxophonist Kebbi Williams. “Sweet Inspiration” lived up to its title, pulling the audience, who would not be denied the chance to dance, into a warm sonic hug for several minutes.

TEDESCHI TRUCKS BAND SET LIST
Wah-Wah
Don’t Let Me Slide
Midnight in Harlem (Swamp Raga with Little Martha)
How It Feels
I Just Kissed My Baby
Love Has Something Else to Say
Ball and Chain
????
Ain’t No Use
Get What You Deserve
Old Time Lovin’
The Sky Is Crying
Uptight
Bound for Glory
ENCORES
Angel from Montgomery > Sugaree
Wade in the Water
Sweet Inspiration 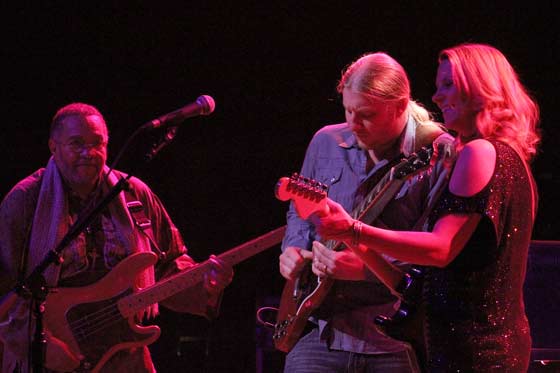