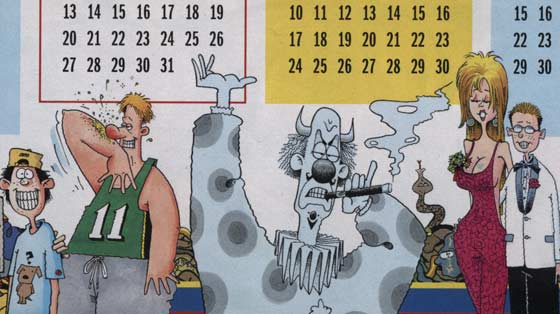 The cover of the current issue of Mad Magazine features a curiously familiar gap-toothed character posing as the love child of Twilight’s Bella and Edward… while a quizzical wolf looks on. It is, of course, the ever-present, Alfred E. Newman – instantly recognizable, as he’s been since the beginning – 60 years ago. That’s right, Mad Magazine has been doing the skewering the sacred and celebration of the silly since its first issue back in 1952.

But what we were hoping to find lurked deep inside the inner recesses of the issue – rather prominently, in fact. It’s a two-page, pull-out, center-fold, 2013 calendar created by Ballston Lake’s own cartoonist sublime, John Caldwell.

Caldwell has long been one of the Mad elite – an inner circle member of “the Usual Gang of Idiots.”

But wait… if you’re one of those non-fun-lovers who mistakenly think that Mad is about as low as you can get on the art world totem pole, consider that Mr. Caldwell has also had his work prominently printed in the prestigious pages of The New Yorker – perhaps the ultimate high for a cartoonist – Writer’s Digest, Playboy, Barron’s, The Wall Street Journal, Reader’s Digest and Harvard Business Review. Additionally, his artwork was featured on the pages of newspapers all across the country (back in the days before print was dead).

And in conjunction with Schenectady photographer Martin Benjamin, back in the early ’80s – when he was desperate for money to fuel his ink habit – he also created the artwork for Blotto’s Combo Akimbo album cover and their music video for “Metal Head.”

So pick up a copy of Mad Magazine and spend your 2013 with Caldwell cartoon characters… unless, of course, the world really does end on December 21. In which case, as Rosanne Roseannadanna used to say, “Never mind…”