Okay, let’s say you’ve never heard the Chronicles play. You’ve never been to one of their club shows, and you missed their opening set at this year’s Albany Riverfront Jazz Festival. Their debut release The Chronicles is an outstanding taste platter of what this exciting sextet is all about, which is serving up the richest musical gumbo in Greater Nippertown. The band’s base is jazz, but from there it goes in so many different directions – the souped-up funk of saxman Jeff Nania’s “Purple Diesel”; the in-your face blues of trombonist/leader Bryan Brundige’s “Triumph”; and the so-cool soul of Jason Panucci’s “Suburban Grind” and Phillipe Chow & Kendra Jones’ “Rain Drops.” (Jones adds bright vocals and evocative piano to the date, as well.)

It’s all linked by skin-tight arrangements, sterling production values, and a dedication to be unlike anything else on the scene. You even see that in the dynamic layout of the CD booklet. The overall look evokes ’60s and ’70s Blue Note albums; a more recent example would be the last two releases by the monster all-star band the Cookers. But the band photos on The Chronicles tell a different story, putting out a vibe that comes closer to what we see from hip-hop groups or jam bands. There’s also an undeniable vibrancy that comes from the smiles on both the inside and outside of the booklet. The message is, “This is gonna be fun!” And you know what? It is! 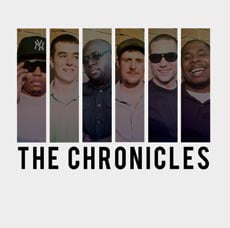 But here’s the thing: A taste platter only gets your mouth excited about what you might experience if you ordered the full meal. Therefore it follows that once you’ve had your taste of The Chronicles, you’re going to want to see the band in their prime element – on stage, playing live. While they did themselves proud during their too-short Albany Riverfront set, that relatively small space was actually too big for the band. To really make the connection with the Chronicles, what’s required is a small club with a big dance floor and a nice long bar at the back. Happily, the Bayou Café has all these things, and the combination of band and venue worked like a charm.

It ain’t nuthin’ but a party at the Bayou on a Friday night, and since this was a celebration as well as a commercial event, it required a party band to get it all started. Nyack’s own Mr. Breakdown filled the bill there, mixing their own originals with rocked-out takes on music by a bevy of ’70s soul bands. The Isley Brothers’ “It’s Your Thing” gave way to a hopping medley of tunes by Tower of Power. Over by the merch table (where The Chronicles was being sold on disc and USB stick), Brundige happily sang along as Mr. Breakdown nailed the chorus to Earth, Wind & Fire’s “Shining Star.” It makes sense Brundige would dig EWF, since they (and the other bands Mr. Breakdown championed) all had the kind of laser-focused horn charts the Chronicles dish out on every chorus.

Eventually it was time for the stars of the night to play… although some of them started before the others. Brundige, Nania and Phillipe Chow were still offstage when the rest of the band unexpectedly began playing an overture of sorts. Laughing, Brundige and Nania blew support chords from the edge of the restaurant area while Chow looked on. Chow didn’t appear at Riverfront and only played trumpet on one track of The Chronicles, but he was part of the band for this show, and his burly horn added color and light to a front line whose power is already measured in megawatts.

That front line finally made it onstage to howls from the packed dance floor, and Brundige lit the candle with my favorite track on The Chronicles, Justin Henricks’ super-chunky “Groove for NOLA.” Henricks has a good thing going on with his own band Way Down, who just opened for Marco Benevento at Red Square. But his sizzling guitar straps a supercharger onto the muscle car that is the Chronicles. “Groove” really speaks to his partners’ core competencies – from the uncompromising force of Brundige’s trombone to the gospel/R&B goodness of Tyrone Hartzog’s keyboards. Andrae Surgick’s Second Line beat put just that much more spring in everybody’s step, while bassist Daniel Lawson sat on a stool at the back of the stage and kept the foundation phat, hot and happy. If you weren’t dancing, you left your pulse rate back at the house.

While all the tunes on The Chronicles are great representations of what this band does, they are also only hints of what this band does with them in concert. All the instrumental breaks are extended, allowing every soloist to let his freak flag fly. To watch Brundige’s face while he blows things up is to see what total commitment looks like; he’s selling out in the John Elway sense, and he was bringing it on this night. Nania has become a force of nature in the time he’s been on the scene, and the Chronicles allows him to show off both sides of his musical nature – blowing Ornette Coleman-like blasts at your head one moment, buzzing Maceo Parker funk sax at your soul the next. And he did all of this on tenor, alto, and the smallest soprano sax you’ve ever seen in your life.

The Chronicles’ fan base is a good gumbo of just about everybody, from the young girls shaking it up at the front of the stage to the African-American man (who was about my age) shouting, “SMOOTH, motherfucker, SMOOTH” after Hartzog knocked us all out with a kicking take on Herbie Hancock’s “Sly.” Instead of following drop-party protocol and playing the new disc from start to finish, they mixed in tracks from The Chronicles with whip-smart takes on everyone from Roy Hargrove and Tony Williams to Tears for Fears and the Brand New Heavies. You wouldn’t think Gerry Mulligan and Avishai Cohen’s music would mix, but the Chronicles nailed Cohen’s “Handsonit” after they poured hot salsa on Mulligan’s “Carioca.”

The Chronicles may be the closest thing Greater Nippertown has to New Orleans’ Galactic – a group that embraces all aspects of music, incorporating multiple influences into a sound that’s truly unique. Bands come and bands go, but I hope this one sticks around for a while, because they’re not done telling their story, and I want to see how it comes out.