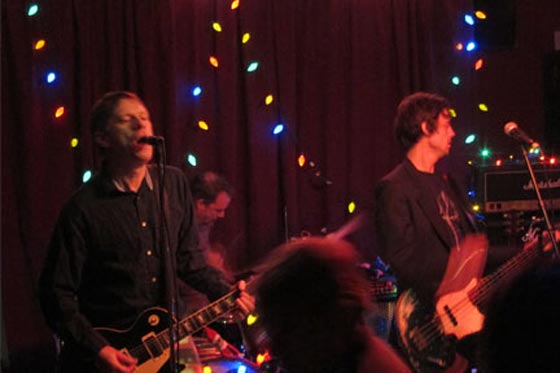 Review and photograph by Joel Patterson

Rock and roll is not complicated. Its force and majesty is all about the simple. Some of the best songs are just short, everyday phrases, repeated twice or three times. The Figgs are such masters of this craft that they made your correspondent and the 75 or so other party hounds at Valentine’s Music Hall in Albany last Friday night forget about everything happening outside its walls (as well as whatever was going on upstairs?)

In 25 years of performing together, they’ve nailed it – they are “riff-meisters” – each song starts with some kind of primal musical figure, and they make it sound like a challenge or a call to arms – Mike Gent’s guitar tone is searing while being clear, articulate, devastating, wrenching and elegant. Pete Hayes hops about on his drum stool like a one-man locomotive engine – when he’s not standing up on it, ready to plunge down at the exact moment into a final thundering smashing, crashing finale to their churning, grooving 3-minute song. For a ’90’s band, bassist Pete Donnelly doesn’t look a day over 17, but he sure does lope over the fretboard like an ancient blues master, delivering a perfectly entrancing subterranean pulse.

They must have an intellectual side, though – the crowd had a definite Nordic, Scandinavian vibe, close-cropped hair, knit caps and a scarf or two – and the sing-along lines, which everybody knew, were pensive laments, like “I don’t do… that no more…,” when they weren’t gospel shouts of “Yeah, you, motherfucker!” The basic content of all the lyrics might boil down to “I’ve been thinking about you…,” but for sure the major take-away is this is THE most solid, pouncing, lift-me-offa-my-feet music heaven will allow.

Resurrected member Guy Lyons joined in for a second set, bringing yet another layer of keening yet melty guitar tone. You know the way Pink Floyd has such a smooth sonic sound? If you sped that way up, so it would gallop along, punching and stamping, that’s these guys. Naturally they leapt off-stage at the very end for a final sizzling spell of crackling, explosive guitar dueling.

No wonder they are legends.