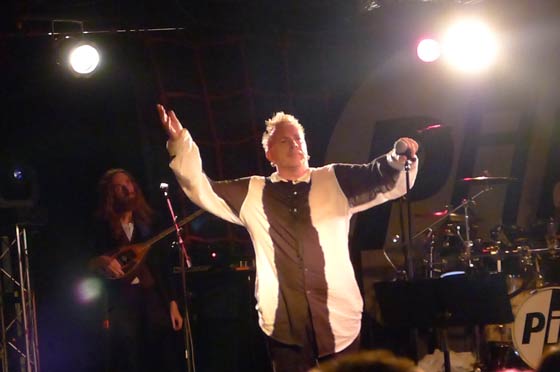 SOME RANDOM BEST OF MOMENTS OF 2012

This ain’t the Mudd Club or CBGB’s, or, Roll Over Capote and tell John Cheever the news…
Author Will Hermes served as guest of honor at the annual Yaddo artists’ colony benefit in June when he read passages from his book “Love Goes to Buildings on Fire: Five Years in New York City That Changed Music Forever.” In what had to be a first at the historic compound where some of the 20th century’s most notable writers and artists created their works, Hermes invoked the name of Patti Smith, the Ramones and the New York Dolls as he stood inside the music room where Aaron Copland performed his compositions to a live audience 80 years earlier. Composer Nathan Barr, who scored the music for the HBO series “True Blood,” served alongside Hermes as the event’s co-host.

Nostalgia for Oblivion
Thirty-five years after he sang about being an anti-Christ, an anarchist and that there was no future for him, 56-year-old Johnny Rotten performed in October at the Upstate Concert Hall in Clifton Park, marking the oddest marriage of local venue and performer since Smashing Pumpkins played atop a makeshift stage at the Colonie Center shopping mall in 2000.

It’s all about the web hits…
President Obama’s visit to the Capital Region in early May topped local news programming, but an in-store surveillance video which captured a Saratoga Springs woman strolling through a Curtis Lumber in the nude one week later garnered headlines as far away as London, England.

Cultural Trifecta
In 2012, the Spa City got back a used record store – DiVinyl Revolution – the promise of a 2013 opening of an 11-screen multiplex cinema and a new, large-scale Northshire Bookstore.

First Amendment, nyet so much
In August, three members of Russian rock and roll band Pussy Riot were each sentenced to two years in jail for hooliganism.

Artist, musician and activist Terry Adkins led an ensemble of Skidmore College students in a performance at the Tang Museum in October which commenced with Adkins’ “activating” art sculptures, with baton in hand, and concluded with students blowing through 18-foot-long horns.

One year after relocating to Brooklyn to further her music career, singer Sarah Pedinotti returned to the region with her band Railbird for a series of funk-filled and ethereal appearances that showcased a new EP, “Lucky,” and a new single, “MIRRORs,” which premiered on MTV Hive.

During the New York State Writers Institute annual summer reading series at Skidmore College, Mary Gaitskill mesmerized the crowd with her words, Rick Moody conjured visions of the Pogues during a reading of his rock and roll lit, and William Kennedy staged a reading – on what would have been his friend, Hunter S. Thompson’s 75th birthday – of an unpublished 100-page play titled “The Light on Caroline Street.”

“Wakin’ Up With the Wolf” Is Back!