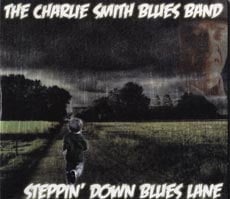 As you may know, Greater Nippertown guitarslinger Charlie Smith was inducted into the New York State Blues Hall of Fame a couple of months ago. What you don’t know is that Smith could have used his new release Steppin’ Down Blues Lane for his résumé tape. Don’t worry, though: This isn’t a “Greatest Hits” package. The lion’s share of Steppin’ comes from live recordings made at various venues over a 10-year period. Cruising through these righteous slices of club life (which is the only way to experience the blues, to my mind), you see the kind of full-throated, unvarnished havoc Smith has been wreaking on the Empire State during this century.

The opening title track is one of four tunes recorded at the late, lamented Savannah’s in downtown Albany. It’s a mid-tempo cruiser that’s got Smith howling off-mic right from the jump, with Robert Aronstein’s organ comping sweet & hot underneath Smith’s gritty vocal. “I got the blues,” Smith tells the crowd, “But I was so young, I was just a kid!” When Smith lets loose his first solo, it goes straight for your throat, and after a semi-joking scat solo, he lets his axe attack the crowd again. You want pretty guitar? Go find an old Pat Metheny Group album. This is down-and-dirty blues, subtle as a flying mallet, and it makes your teeth curl back into a big wide smile. Aronstein’s pumping follow-up solo goes right down that same mean street, and “mean” never felt this fun!

Aronstein is the one constant as Smith takes us on a trip that starts at Savannah’s in 2001 and ends in 2011 at Carmen’s Café in Troy. The latter gig has Smith cranking Texas swing with his original “Lucky As I Am.” Aronstein plays piano here, and he’s rolling out the barrelhouse. At the other end of the emotional scale is “Walkin’ All Night in the Rain,” as one more blues dawg takes his pain down the road while the heavens dump water on his head; in the middle is the raging studio track “Blame it On Me,” where Smith’s protagonist finally throws up his hands and tells his Significant Other, “Fine! It’s ALL my fault – even the stuff I didn’t do!”

Most of the tunes on Steppin’ are originals, but Smith and Aronstein also tear it up on Peter Green’s “Long Grey Mare.” Green also wrote “Black Magic Woman,” one of two minor missteps Smith makes on Steppin’ – the other being the B.B. King signature song “Thrill is Gone.” It’s not that Smith doesn’t play his ass off on both tunes – he does – but any guitarist that calls either of these classics is always going to lose in comparison to the original recording. Besides, Smith’s own material is hot enough that he shouldn’t have to fill with too-famous covers like these.

The time span on Steppin’ lets us hear the various rhythm sections Smith and Aronstein have loaded in the van over ten years. Drummer Andy Hearn and bassist Mike Lawrence are the current iteration, and they keep it straight, hot and true like all their predecessors. Lawrence is a revelation all his own, given that he’s primarily known for his stand-up bass work with jazz acts like Yuko Kishimoto and Michael Benedict & Bopitude. Then again, Lawrence isn’t the only jazzer Smith’s played with: Bob Halek (who plays with… well, everybody) pilots the drums on the rollicking closing track “Big Bad Bump/Me and My Baby (Ain’t Got the Blues).”

In the end, it really doesn’t matter who lays the foundation. The whooping crowds you hear on Steppin’ Down Blues Lane make one thing perfectly clear: As long as Charlie Smith has a guitar, a microphone and Robert Aronstein playing whatever keyboard he can find, all is right with the world.

Birthday Blues: Charlie Smith will be rolling into Pauly’s Hotel on Friday (January 4) for a very special night, as he celebrates his 62nd birthday in fine fashion. Showtime is 8pm. Come on down and congratulate him!

Bill Payne, What Was the First Album You Ever Bought?