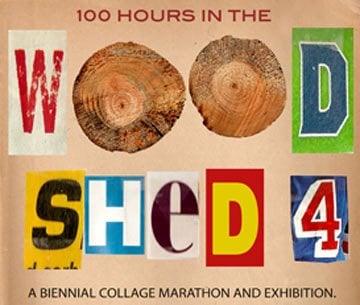 100 Hours in the Woodshed @ MCLA Gallery 51, North Adams. Dozens of artists converge for a five-day marathon of collage-making, beginning Thursday, January 24 with a “Meet the Artists” reception from 5-7pm. During the five days that follow, the galleries will be a flurry of collage of every sort: from paper and glue, to film and sound; the gallery-as-makeshift-studio will remain open to the public 10am-10pm and visitors are encouraged to stop by and watch the work in progress. The exhibition will then be curated by Susan Cross of MASS MoCA and Gallery 51 manager Ryder Cooley, with an opening reception on Tuesday, January 29, 5-7pm. (Through February 24)