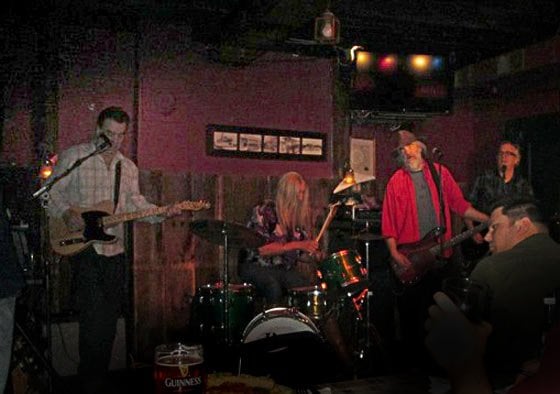 If you missed one of the best rock and roll shows this area has ever seen, here are some suggestions for how to gain some freedom from thankless responsibility and mundane self-absorption, so that you can experience the indelible buzz that should be rightfully yours the next time the Catbirds roll into town:

1) Put your kids up for adoption with Russian host families.
2) Return your dog, cat or other pet to the animal shelter.
3) Unplug your television and leave it on the curb or under a neighbor’s rain gutter.
4) Apply a sledge hammer to your iPhone and/or iPod.
5) Tell Grandma you’ll play Call of Duty and Halo with her on a week night.

The Dos Equis man has got nothing on Chandler Travis, who is arguably the Most Interesting Man in the World. Leading more bands than George Clinton in his prime, a barefoot Travis brought the Catbirds into Troy for their Ale House debut, and 37 songs later the crowd was still howling for more.

Electrifying and mesmerizing best describe the sound of the Catbirds, whose 2012 debut Catbirds Say Yeah rocks the body and the soul in equally frenetic measure. Live, the “Wow!” factor goes up several levels when this band plugs in and taps into a collective psychedelic garage rock and beach music unconsciousness. Travis (bass and vocals), Dinty Child (various guitars, mandocello and vocals), Steve Wood (guitars and vocals) and Rikki Bates (powerhouse drums) entered the cozy room to applause. “We’ve been dreaming of you all day!” announced Travis with a grin and tip of his hat before counting off Ronnie Dawson’s modern day rockabilly classic “Fish Out
of Water.” Next, Steve Wood wailed on “Stoned,” a cut off the new album that merged the demented innocence of the Thirteenth Floor Elevators and abandon of the Fleshtones.

The party had officially begun.

Picking favorite moments from the two sets is daunting because the bar was set so high and never let up. Travis took the helm on the original “All I Wanna Know Is,” tossing out snarled lines with gusto and letting the band throw riffs out in a blaze of fuzz and feedback. Mel Torme’s “I’m Coming Home Now” featured deft vocalizing by Wood, Child and Travis, all held down by the impeccable stick work of Bates. The loose but tight “Red Red,” with Dinty Child on lead vocals, sounded like a song that would have had Bo
Diddley and Doug Sahm high-fiving each other at the Continental Club. Barbara Lynn’s 1965 chestnut “Can’t Buy My Love” brought some Gulf Coast strut to the room for the dancers; “Beer Town!” was an intoxicating mix of rock and monologue (the latter delivered by Child, extolled humorously the long process of how beer makes its way to the consumer); and “Changing Names,” a track from the new album, brought melodious rambunctiousness that rivaled the Who in their prime. “Once Proud Ghost,” just written recently, was a sweet instrumental showcase for Wood and Child, each bringing economy and wit to the solos.

When the encore came, it was an incendiary take of Link Wray’s gonzo instrumental “Jack the Ripper,” which ended several minutes later with Bates’ drum kit tossed out onto the dance floor and enough feedback from
Wood and Child’s guitars to remove the chicken wing grease stains from Travis’ t-shirt. 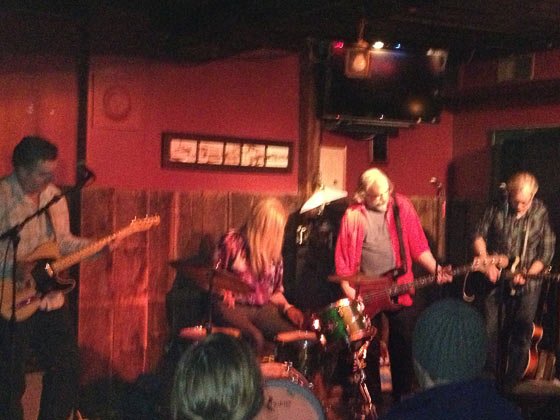