Jazz2K: CD Picks of the Month

2012 was like other years for me – so much music, so little time. So here are five releases that didn’t get talked about before the ball dropped in Times Square: 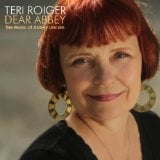 TERI ROIGER
Dear Abbey: The Music of Abbey Lincoln
(Inner Circle Music)
Here’s another Greater Nippertown musician who used crowdsourcing to take an idea from vision to reality. Thanks to her tireless efforts through Indiegogo, Teri Roiger has gifted us with a glowing portrait of Abbey Lincoln as singer/songwriter. Lincoln put beautiful words to the music of Thad Jones and Charlie Haden, and wrote the smoke-filled “Hey Lawdy Mama (Blues for Mama)” with another iconic vocalist, Nine Simone. Roiger’s rich phrasing finds every bit of truth in Lincoln’s lyrics, making “Wholly Earth” bright as sunrise and “You Gotta Pay the Band” resigned but hopeful. Roiger’s take on “Bird Alone” flies a little higher thanks to Greg Osby’s fluttering alto sax. John Menegon’s arrangements are as sharp as his bass lines are fat, and Frank Kimbrough’s eloquent piano work is simply transcendent. Emails you can delete, but this is a love letter to be read again and again.

TORBEN WALDORFF
Wah-Wah
(ArtistShare)
ArtistShare was crowdsourcing before crowdsourcing was cool, and they’ve done their good work again – this time for guitarist Torben Waldorff, who builds on the eyebrow-raising music the Denmark native made on his 2011 disc American Rock Beauty. Waldorff and keyboardist Gary Versace bounce ideas off each other on the spiraling opener “Circle and Up” even as they develop brilliant thoughts of their own. That process surges through the whole disc, making Waldorff’s clever originals throw off even brighter sparks. Bassist Matt Clohesy and drummer Jon Wilkan lay an impeccable floor while adding sneaky little embellishments of their own, notably on “Fat #2.” There’s an incredible sweet spot in Waldorff’s sound that lands somewhere between Pat Metheny and John Abercrombie, though Wah-Wah bears little resemblance to the work the aforementioned artists did with ECM. Here’s hoping Waldorff finds a smart label who’ll handle the money and leave the music to him. 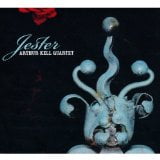 ARTHUR KELL QUARTET
Jester
(Brooklyn Jazz Underground)
Mitt Romney’s “47 percent” moment notwithstanding, we got more truth in a half-hour with Jon Stewart or Stephen Colbert in 2012 than we did from the entire election. Well, ‘twas ever thus. Back in the days of Good King (Insert Name Here), it was the jesters who could call bullshit without fear of getting their heads lopped off. Bassist Arthur Kell isn’t a comedian, but there’s an incredible integrity to the music he makes, and he tells his truths in ways that make you re-boot your perspective. Jester (recorded live in Germany, as was his previous BJU release Victoria) is like a painting hung crooked in a modern art gallery: It looks wrong to start, but when you take in the whole picture, you see what the artist is saying. Kell’s paintbrushes are altoist Loren Stillman and guitarist Brad Shepik, both of whom share Kell’s love for the outside of the box, and the colors and shades they bring to the party cover the whole rainbow. Drummer Mark Ferber literally paints with brushes on “Song for the Journey,” which tells its story in a hushed, reverential voice. If Jester sounds avant-garde, it’s not. It’s four musicians taking “the norm” and hanging it crooked. It might make you laugh, and it will make you think. 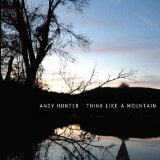 ANDY HUNTER
Think Like a Mountain
(River Records)
Trombonist Andy Hunter is better known for his work with the devilishly clever quartet Spoke, but the massive charts that drive Think Like a Mountain shows he’s reaching for bigger and broader things. The music itself sounds like Miles Davis tried to invent fusion with the Birth of the Cool band. Hunter leads a killer three-man front line featuring trumpeter Alex Sipiagin and bari-saxman Jason Marshall, and the muscular lines they put out are matched volt for volt by keyboardist Dave Kikoski, who leaves his acoustic comfort zone behind to crank out crackling Fender Rhodes goodness. Spoke drummer Danny Fischer teams with bassist Boris Kozlov on a hot bopping foundation, although Kozlov breaks out the bow for a glowing re-take of “Deed by Delusion” (which appeared on Spoke’s self-titled 2008 debut). Hunter also successfully renovates Cole Porter’s “What is This Thing called Love” and Richard Rodgers’ “Bewitched, Bothered and Bewildered,” but it’s the originals that stand out here, culminating with a closer that packs the best title of all time, “Post-Occupational Hazards for the Pre-Occupied 99%… Blues.” Try saying that five times fast! Better yet, just play it. You’ll be better off. 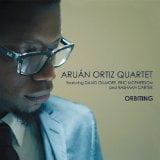 ARUAN ORTIZ QUARTET
Orbiting
(Fresh Sound New Talent)
According to his publicist, Aruán Ortiz doesn’t consider his music to be very complicated… which makes me want to ask the Cuban piano phenom, “Have you listened to yourself?!” You could easily call Orbiting “math jazz,” because catching all of the time changes requires a degree in trigonometry, or at least a Macbook Pro equipped with Excel. Don’t get me wrong: Ortiz’ sophomore effort for FSNT shows that there are plenty more bright ideas coming from the supercomputer inside his head: Aside from yanking Hermeto Pascual’s “Ginga Carioca” and Charlie Parker’s “Koko” into the 21st century, Ortiz’s originals address Afro-Cuban concepts with an undeniably contemporary sensibility. The result is music that may be being attempted elsewhere, but I kind of doubt it. It helps that Ortiz has recruited players like guitarist David Gilmore and drummer Eric McPherson, who excel at this kind of musical twelve-dimensional chess. If you’re looking for an “easy read,” Orbiting is the wrong choice. However, if you want to experience one of the most interesting minds in the genre, get out your wetsuit and take the plunge.