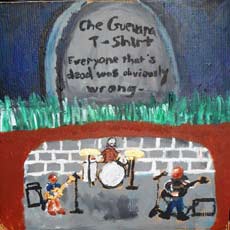 And they said it wouldn’t last…

Yes, Che Guevara T-Shirt are back once again, dropping their third album Everyone That’s Dead Was Obviously Wrong this month.

Following their 2009 debut Stochastic Models of Che Guevara T-Shirt and their solid sophomore disc New Young Guns of the Angular Wooden, CGT steps back into the spotlight at Valentine’s Music Hall in Albany – yeah, we know that Valentine’s doesn’t really have a spotlight, it’s just a figure of speech, OK? – on Friday (February 8) to celebrate the release of their new album on the Noreaster Failed Industries label.

On the new album, K. Sonin and his not-so-merry band of arithma-rockers (lo-fi, minimalistic math rock) crank out 10 ditties – including “Failure in Wisconsin, Failure in Outer Space,” “Let’s Occupy Glenn Branca” and our personal XTC-inspired fave “K. Sonin Can’t Even Go to Albany Anymore,” the album’s most pop-fueled track, although it does quite delightfully fall off the tracks a couple of times.

As Mr. Sonin explains, “Following the small concrete room claustrophobia of CGT’s last album, Everyone That’s Dead… finds the band letting in some light and exploring a cleaner, more dulcet sound. And while the two prior albums were primarily guitar, bass and drum affairs, the new thing features two gorgeous baritones, which CGT bends into angular rainbows of sound.”

Che Geuvara T-Shirt emerge from their lair for a rare live performance on Friday (February 8) at Valentine’s. They’ll be sharing the stage with one-man extravaganza Irradiated Beef and the Latent. Doors open at 9pm. A free copy of the new CGT will accompany each paid admission.