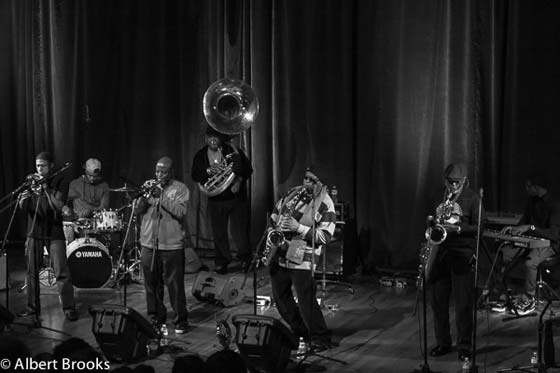 When you see a New Orleans institution like the Dirty Dozen Brass Band, you expect to get a real sense of the Big Easy – no more so than on Mardi Gras Weekend, and regardless of whether there are cars outside the theater that are buried in snow. “You know we’re not used to this,” leader Gregory Davis laughed as the band settled themselves onstage. Tenorman Kevin Harris stood next to him, wearing a large grey-and-black sweater and a scarf that was definitely not for show, while bari-sax player Roger Lewis sported a black Jerry Garcia Band t-shirt over another black, long-sleeved t-shirt. In short, Dirty Dozen was definitely out of its climatic element.

Nonetheless, with a little help from the audience (who would be called on to participate multiple times over the next 60 minutes), the band snuck into a delicious take on the Meters’ “Fiyo on the Bayou.” While Harris did blow up real good towards the end of the tune, solo licks were actually secondary. The same can be said for Davis’ vocals: As a singer, Davis is a terrific pocket trumpet player, and that didn’t matter one whit. As with most music straight outta NOLA, it’s the groove that’s the thing, and the groove was utterly bodacious as the rest of Dirty Dozen’s front line buoyed Harris’ rising attack.

And it just kept getting better as they rolled right into a rocking take on Earl King’s “Big Chief.” Davis nailed the whistling solo that made Professor Longhair’s version so classic, and the band snuck in a quick verse of Jessie Hill’s “Ooh Poo Pah Doo” before polishing off “Big Chief.” It was during Kevin Harris’ towering out-solo on their new tune “Festival” when we got a real recent sense of the Big Easy: Without warning, the front line’s microphones and monitors went completely dead. “Y’all don’t have to go to the Super Bowl to see the power go out,” Davis cracked. Unfortunately the problem persisted, despite the best efforts of Massry’s tech crew. The sound came back intermittently, but then it would go south again. “Y’all forgot to the pay the light bill,” Davis wondered aloud, looking around in bemusement.

But here’s why analog beats digital (and that’s coming from someone who’s married to his iPod): Like a lot of brass bands, Dirty Dozen made its bones playing parades around New Orleans, and still plays them today. To paraphrase one of my favorite Humphrey Bogart films, they don’t need no stinking microphones! They just blew a little louder and worked a little harder. “Sound’s gone, but we still here,” Harris commented. Sousaphone player Kirk Joseph stepped up to the front line, the band went into the funky noise of “Git Up” (another piece from their latest release Twenty Dozen), and the show went marching on. 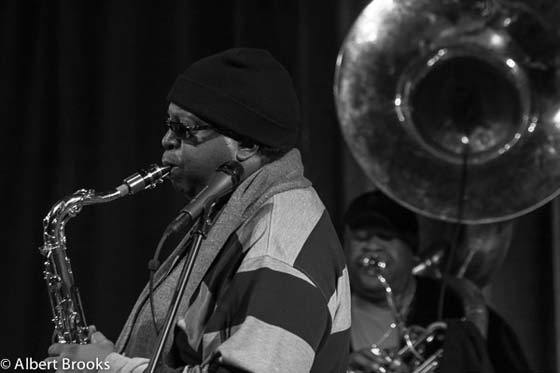 Thankfully, the keyboard hadn’t lost power… or, at least, it worked better than the front line. And that’s good, because Kyle Roussel was monstrous in solo and support. As great as the longtime members of the band were, Roussel and the other “kids” onstage matched them in energy and creativity. Drummer Alvin Ford, Jr. brought the Second Line to “When the Saints Go Marching In” and trombonist David Harris displayed an absolutely ferocious attack on “New Second Line” and the romping closer “My Feets Can’t Fail Me Now.” Despite the short set time and the various technical issues, the crowd loved it all, and loved it even more when Davis and Lewis came back for a blues-soaked duet encore of “Saint James Infirmary.”

Two days removed from gracing the cover page of Metroland, the Chronicles only had 45 minutes to warm up the crowd, but they got the job done splendidly, mixing tunes from their eponymously-named debut disc with a couple of covers and a brand-new, written-that-week piece called “Spanning the Gap” that gave saxman Jeff Nania a chance to show his skills as a rapper. Given the Chronicles’ history of jamming out, the set seemed way too rushed, but they still displayed the genre-busting brilliance that makes them so much fun. It was a great appetizer for the main course that was to come, even though that feast was served a little too quickly, as well.

SECOND OPINIONS
Rudy Lu’s photographs at Albany Jazz
Excerpt from Michael Hochanadel’s review at The Daily Gazette: “This veteran crew does unanimous flawlessly: The grooves were phat and fun, spicy and slick, but the solos hit hard, too — from 70-year-old baritone sax boomer Roger Lewis to 24-year-old drummer Alvin Ford Jr., who’s younger than the band. [Trumpeter-bandleader Gregory] Davis whipped, invited or hyped the capacity audience to its feet or into claps that were actually on the beat, as well as singalong chants. Even when the mics up front failed and he shouted through cupped hands, he had the power. At the end, they invited some fans on stage to dance; some knew what to do, some didn’t — but everybody enjoyed themselves.” 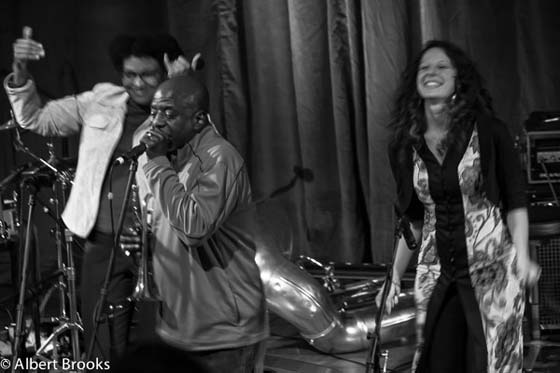 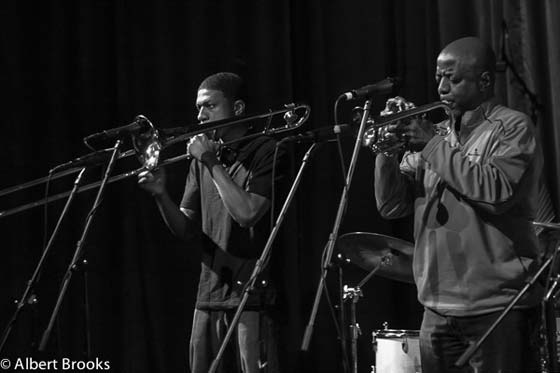 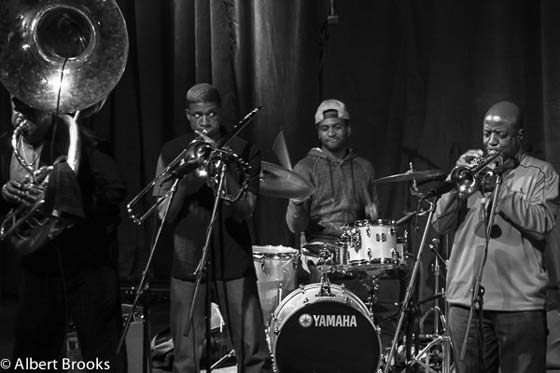 Concerts Re-Scheduled in the Snowstorm Aftermath…