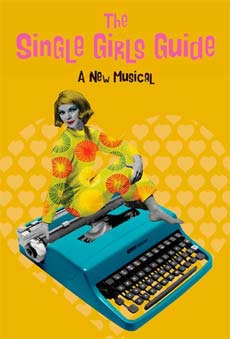 “Is being single really just as bad as being dead?” Rhode Island dental hygienist Harriet Smith writes to newspaper advice columnist Auntie Agatha. The year is 1966, and Emma Woodhouse (Kate Loprest) – the spirited, single, about-to-turn-30 columnist who’s getting tired of writing Agatha’s column after seven years – wants to help modern women embrace their singleness, and Harriet (played with a keen sense of timing by Farah Alvin) is about to become her model “it girl.”

Written and directed by Gordon Greenberg, “Single Girls Guide” is a kind of female-empowered “Mad Men” crossed with “Sex in the City” without the sex. It’s Jane Austen’s “Emma” mashed-up with “That Girl.” It’s Helen Gurley Brown-meets-Ann Landers.

And it’s fun in a frothy kind of way, filled nearly non-stop with a parade of original songs penned by Tommy Newman that resonate with a vintage mid-’60s Brill Building vibe without resorting to the temptation of parody. The stand-out tunes include the slinky soul of “Do It Like a Man,” the blues stroll of “What Women Want,” “Without Her” (sung by Emma’s editor [Jonathan Rayson]) and Loprest’s big powerhouse solos, the Act One closer “Writing My Own Story” and “The Girl With All the Answers.” All were played expertly by the impressively versatile trio of keyboardist-musical director Zachary Dietz, bassist Mike Wicks and drummer Joe Barna.

In addition to the excellent stage set (Jo Winiarski), costumes (Dane Laffery) and wigs (???), the dialogue is peppered with references that help conjure up ’60s flashbacks – George Hamilton, mimeographs, Rod Serling, Salisbury Steak frozen TV dinners, Truman Capote, “Ben-Hur” – but what really helped to establish the time period is the handful of clever “Marriage & Family Living Series” public service announcements/cigarette commercials by Andrew Cahill that are interspersed through the production.

Tuesday’s opening night performance at Capital Rep was the world premiere of a brand new musical – only the second musical premiere that the theater has ever presented – and it was heartening to see a jam-packed house turn out for an evening of unknown entertainment. Are we all getting a little more adventurous? Let’s hope so…

SECOND OPINIONS:
B.A. Nilsson’s review @ Metroland
Michael Eck’s review at The Times Union
Richard DiMaggio’s review at Did You Weekend?
Excerpt from Amy Durant’s review at The Daily Gazette: “Loprest’s Emma is stunning onstage — she seems to have been made for ’60s fashions, and Dane Laffrey’s gorgeous costume design does not disappoint. Loprest’s voice leaves a bit to be desired — she is a little off in some of the more powerful moments in the songs — but it’s early yet, and I’d be willing to guess she’s just hitting her stride. Farah Alvin’s Harriet steals the show. From her beginnings in a dental office to her release upon the streets of New York, she commands the stage with her presence as well as her voice. Her ‘In Your Mouth’ with Robb Sapp (as her timid Rhode Island beau, Henry) was easily the most enjoyable song of the evening.”

STOP THE PRESSES:
The play mentions that Harriet has been seen at all of the hippest nightspots around NYC, including the Peppermint Lounge. But the play takes place in 1966, and the Peppermint Lounge closed in 1965.
The name of the play is “Single Girls Guide,” and that’s the same spelling that’s emblazoned in the headlines on many of the newspapers seen on stage. But the sign hanging on Emma’s desk reads “Single Girl’s Guide.” So apostrophe or no?