Stunned. And amazed. And stunned.

Sixties era garage rock and roll and raunchy takes on ’70s and ’80s pop hits, played with equal ferocity and wit, captivated patrons of the Ale House on a Saturday night in Troy. You had to be there, and if you weren’t, well, then your vanity plate should forever read “DEPRIVED.”

Knyghts of Fuzz, a trio with a penchant for volume, speed and Norton Records-certified distortion, opened with songs that rarely went beyond the three-minute mark. Decked out in striped shirts and referring to each other as “Jackson,” Ian Carlton (guitar and vocals), Frank Novko (bass and backing vocals) and Brian Goodman (drums and vocals) set their amps in the red zone for maximum bleeding and minimal nostalgia, and then drew patrons of the bar into the performance area quickly with classics like “She’s U-G-L-Y,” “Squad Car” and “The Party Lights.” Stragglers were not left behind – at various points in the hour-long set, Novko and Carlton strolled out of the room like crazy woodpeckers and rounded up some more listeners.

How kick-ass is this band? Local rock icon Tommy Love was seen near the stage, agape and soaking up the mayhem, especially when the band dedicated a warp-speed take of the Rolling Stones’ “Rocks Off” to him. Grinning with electricity from the roar from the crowd, KOF closed out their 60-minute set with “Fleshtones Saved My Life,” a rocker from the heart, paying tribute to the NYC legends who have torn it up many times in Troy the last several years.

After a decent break to allow the crowd to stretch their legs and bend their elbows, Goodman and Novko hit the stage with “Million Dollar” Bill Harrison on guitar and Justin Birk on saxophone (and occasional acoustic guitar). A keyboard, set at a perpendicular angle to the crowd, occupied a spot by the center microphone for the star of the show, Ritz Carlton. Sporting the cheapest cologne money can buy at CVS, shades and a tuxedo from the prom that time and a dry cleaner forgot, Ritz Carlton strolled in, blowing kisses to the ladies in the crowd. After all, this was billed “Music for Lovers.”

Charismatic, sleazy and yet always ready to croon in a variety of keys, Carlton brilliantly mauled “Do You Think I’m Sexy?,” stepping away from the microphone occasionally to sip an unspecified drink and play that cheesy synth riff which, to this day, still signifies the day Rod Stewart lost his integrity. Clarence Carter’s ode to nastiness (“Strokin'”) got the raunchy Southern soul revival treatment it deserved, the band locking in on the groove and never losing focus despite the antics of their leader, who went through the crowd, extemporizing and even interviewing the audience about their love life.

Jokes more off-color than his raiment often punctuated Carlton’s extended interludes between the verses on several songs. “It’s not all glitz and glamour tonight!,” exclaimed Carlton around midnight, before launching into Tina Turner’s “Private Dancer,” a manic performance that nobody in attendance will ever cleanse from their memory. Closing out with some vintage Bad Company (“Feel Like Makin’ Love”), Carlton had the full room hollering for more, with several sharp-eyed folks tearing down posters promoting the gig as take-home souvenirs.

PS: Happy birthday to Ian and Ritz Carlton, who are both celebrating their birthday today (March 11)!

RITZ CARLTON & HIS FABULOUS BAND SET LIST
Do You Think I’m Sexy?
Strokin’
Escape (The Pina Colada Song)
Let’s Get Physical
I’ll Make Love to You
Having My Baby
Woman, Woman (Have You Got Cheating on Your Mind?)
The Stroke
After the Loving
Private Dancer
Feel Like Makin’ Love

KNYGHTS OF FUZZ SET LIST
U-G-L-Y
3/5 of a Mile in 10 Seconds
Squad Car
I Won’t See You Anymore
Party Lights
Never Grew Up
Genny
Hey Sha-lo ney
Tiger Girl
Stop and Think It Over
Cara-lyn
Let It Go
Rocks Off
What a Girl Cant Do
Gonna Search
Back in the U.S.S.R.
Fleshtones Saved My Life 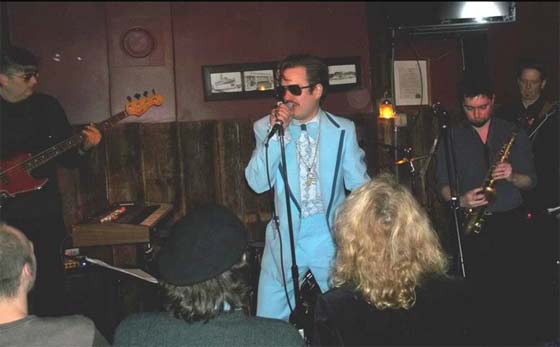 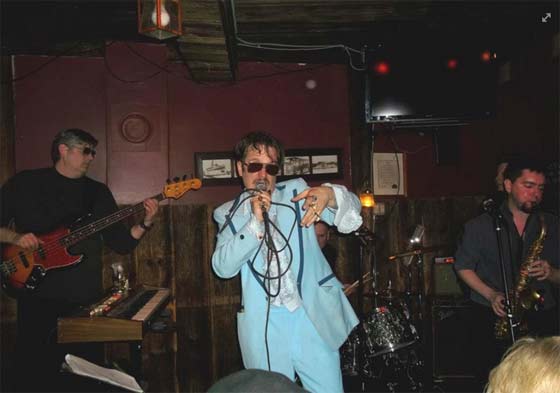