New Release Rack: Chandler Travis Three-O’s “This Is What Bears Look Like Underwater” 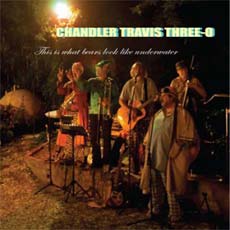 The band has rumbled through town several times, but their return to Caffe Lena in Saratoga Springs tonight marks their first area appearance since the album was released.

So what to expect? Well, as Marlon Brando would say, “Whatta ya got?”

From there, CT3O roam through charming pop ballads (“Make the Small Things Pretty”), bongo-laden retro lounge (“Camel, Passing Through the Eye of a Needle”), a pair of well-chosen covers (NRBQ’s “Things to You” and the Beatles’ “In My Life”), the loping, accordion-fueled valentine “Paper Roses,” vintage swaggering swing (“I Still Drink My Coffee Blue”), a jazzy vocal-fuguing romp (“One Step Forward”) and … well, you get the idea.

The album comes with multiple ties to the Capital Region, as well. Greenwich’s David Greenberger contributes lyrics to three of the tunes. Caffe Lena soundman extraordinaire (and occasional Nippertown contributor) Joe Deuel snapped the cover photographs. And the NRBQ cover was recorded live during a garden party last summer on a backyard hilltop at the Eagle Mills home of Denise Borden, the band’s publicist.

Yes, it’s all over the musical map, and it’s all utterly winning. In other words, it’s exactly what you might expect from Travis… only more so.

The Chandler Travis Three-O performs at Caffe Lena in Saratoga Springs tonight (Friday, March 15). And you can bet that this is going to be a very special show – celebrating the dual birthdays of both Travis and Deuel. With birthday cake, of course! Jack Grace opens the show at 8pm. Tickets are $22.